Research at the Institute uniting cell signalling, autophagy, mass spectrometry and imaging expertise has resolved a fundamental question about whether the cellular recycling process is halted during cell division. In addition, the researchers have identified the mechanisms involved and described how the usual repression system and the mitosis-specific repression of autophagy interlink. The research, led by Simon Cook’s group in the Signalling research programme at the Institute, is published today in the journal Molecular Cell.

Autophagy is the cellular recycling process that balances the availability of cellular building blocks with demand. If demand exceeds availability, autophagy ensures that non-essential components are broken down and repurposed. Autophagy is essential in our cells as it allows cells to cope with stress, such as reduced nutrient availability. It is crucial for correct embryo development and problems with autophagy are linked to a wide range of diseases and disorders. Indeed, it is speculated that the repression of autophagy during mitosis reported here ensures protection of the genome during this vulnerable period, preventing genomic instability, a feature of ageing and cancer.

“Bringing together the expertise from different groups here at the Institute allowed us to provide a definitive answer on whether or not autophagy is repressed during mitosis. In addition, we’ve been able to describe the mechanisms involved to provide a much clearer understanding of what is actually happening,” said Dr Simon Cook, group leader in the Institute’s Signalling research programme. 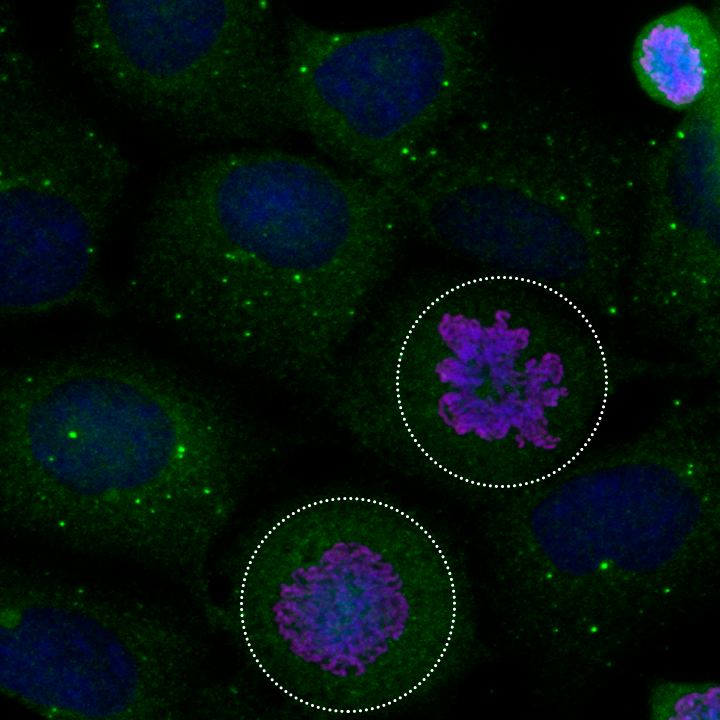 The researchers used fluorescent markers and live-cell imaging of human cell lines to unequivocally demonstrate that autophagy is repressed during mitosis.

Under usual conditions when the cell is not dividing, the mTORC1 protein complex represses autophagy when sufficient amino acids are available in the cell to meet its requirements for protein synthesis. However, once the level of amino acids drops, mTORC1 is inactivated. This relieves the repression and autophagy kicks in, generating amino acids and other building blocks to ensure that the cell’s needs are met.

During the cell division process, the cell’s DNA, which is usually held protected in the nucleus, becomes released into the wider cellular space. This was proposed to leave the DNA vulnerable to digestion and damage by autophagy, prompting previous researchers to argue that autophagy must be repressed during cell division in order to maintain genome integrity. This concept was contested by others who reported that autophagy was maintained during the division process.

The Institute researchers found that during mitosis, the established nutrient-responsive mechanism of autophagy repression by mTORC1 was absent. Instead, it was replaced by the key regulator of mitosis itself, CDK1, which is not responsive to nutrient deprivation. This has the effect of decoupling the conditional control of autophagy, putting a definitive halt on autophagy until the cell division process is complete.

Richard Odle, first author on the paper and who undertook this work while a PhD student in Simon Cook’s group, said: “Using established models of autophagy and mTORC1 developed by the Ktistakis group, we have been able to show the lack of autophagosomes (the cell’s recycling factories) during mitosis. Furthermore, our identification of a switch in regulation from mTORC1 to CDK1 provides a fundamental new insight into autophagy during mitosis, and clarity for associated research fields going forward.”

Image description
Main image: HeLa cells viewed using different microscopic methods. Right panel of main image and inset image: HeLa cells stained with an antibody for ATG13 (green), which marks ‘autophagosomes’ the cell’s recycling factories. They are also stained with a dye called DAPI, which marks DNA (blue). These cells have been starved of amino acids; this activates autophagy, causing the assembly of autophagosomes, which are seen as discrete green dots.

Inset image: The two highlighted cells are in mitosis (their chromosomes have condensed and are clearly seen in blue); these cells exhibit few or no green dots indicating that autophagy has been repressed in cells undergoing mitosis.

About the Babraham Institute
The Babraham Institute undertakes world-class life sciences research to generate new knowledge of biological mechanisms underpinning ageing, development and the maintenance of health. Our research focuses on cellular signalling, gene regulation and the impact of epigenetic regulation at different stages of life. By determining how the body reacts to dietary and environmental stimuli and manages microbial and viral interactions, we aim to improve wellbeing and support healthier ageing. The Institute is strategically funded by the Biotechnology and Biological Sciences Research Council (BBSRC), part of UK Research and Innovation, through an Institute Core Capability Grant and also receives funding from other UK research councils, charitable foundations, the EU and medical charities.