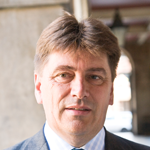 The Babraham Institute is delighted to congratulate Professor Clive Page on being recognised in the Queen’s Birthday Honours list over the weekend. He is made an OBE for services to Pharmacology. Professor Page has been a member of the Institute’s Board of Trustees since 2008 and also represents the Institute on the Board of Directors for Babraham Bioscience Technologies Ltd. (BBT). He has played a major role in assisting and developing both organisations, most notably in guiding the significant expansion of facilities at the Babraham Research Campus.

Professor Page is Director of the Sackler Institute for Pulmanory Pharmacology and Professor of Pharmacology at King’s College London. He was Awarded the Society of Biology President’s Medal in 2012 in recognition of his work to champion openness in animal research and in encouraging animal welfare considerations alongside research.

A shining research career has seen Professor Page produce over 250 scientific papers. His primary interests lie in examining the effects of drugs on swelling and inflammation in the lungs and airways. He has also partnered with Dr Heidi Welch, a Group Leader in the Institute’s Signalling programme, examining the role of signalling in inflammation. Professor Page’s research has led him to co-found Verona Pharma Ltd., an organisation focused on developing new drug treatments for respiratory diseases.

Professor Michael Wakelam, Director of the Babraham Institute, said: “Many congratulations. This is fantastic news and a well-deserved recognition of Clive’s commitment and skilled leadership. He is a valued colleague who has made many significant contributions to the successes of the Institute. I am proud to work alongside him.”

Image Credit
Image source: the eastern façade of Buckingham Palace and the Victoria Memorial, as seen from the gardens. by David Iliff via Wikimedia Commons.