This week, the Institute celebrated the success and achievements of individual researchers, awarding the Sir Michael Berridge Prize, the Knowledge Exchange and Commercialisation (KEC) Prize and the Public Engagement (PE) Prize during the annual Berridge Prize lecture on 21st June. The Sir Michael Berridge Prize is awarded annually to a PhD student or postdoctoral researcher for their contribution to an outstanding piece of published science. The KEC Prize recognises an individual or team who have contributed to the Institute’s KEC activities, demonstrating enthusiasm for generating impact and transferring their knowledge, whilst the PE Prize recognises contribution to the Institute’s public engagement activities, demonstrating enthusiasm and commitment to sharing the Institute’s science with a range of audiences. 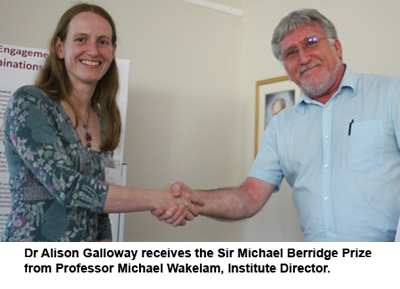 The Sir Michael Berridge Prize 2016 was awarded to Dr Alison Galloway, a recently graduated PhD student in the Institute’s Lymphocyte Signalling and Development research programme. Alison won the award for a recent publication in Science, on which she was first author. The research uncovered the role of sequence-specific RNA binding proteins in ensuring correct entry and exit to the resting phases of the cell cycle during B cell development.

Speaking about the prize, Alison said: "I'm really pleased to win this Prize and would like to thank Martin Turner and my co-workers and collaborators for their contributions to getting our paper published in a top journal."

After awarding the Prize, Professor Michael Wakelam, Institute Director, said “I was delighted to award the 2016 Sir Michael Berridge Prize to Alison. Her recently published research not only reported her outstanding work but is also an excellent example of collaborative working, bringing people together from across the Institute to share the expertise residing in the research and facility teams. Her presentation of this research at the Berridge lecture was impressive in its clarity, I enjoyed it immensely. The quality of the research and the accessible way it was presented demonstrates that Alison is a very worthy recipient.” 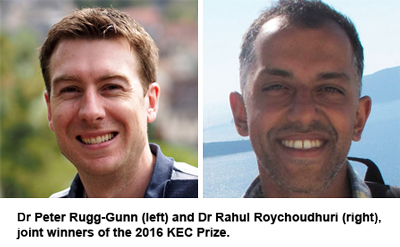 Peter was recognised for his continued contribution to the KEC programme as the Epigenetics Representative and in particular for his recent work to provide evidence for policy-makers on the topic of genome editing. Peter has participated in a number of policy workshops, including ‘Stem Cells and Society: Planning for the Future of Gene Editing’, which resulted in the publication of a report.

Rahul, who joined the Institute in September 2015, was commended for proactively establishing a number of commercial collaborations. As well as developing new contacts himself, he has been an enthusiastic participant in and speaker at industry networking events. This work has resulted in two CASE PhD studentships; collaborations with three Babraham Research Campus companies and a successful collaborative application for a CRUK Small Molecule Drug Discovery Project.

Adam Bowen from the BBSRC Innovation and Skills Team, a judge of the KEC Prize, said: “It’s great to see the development of nominations since the KEC Prize was first introduced. Overall, the nominations were of a high quality outlining a broad range of KEC activities.” 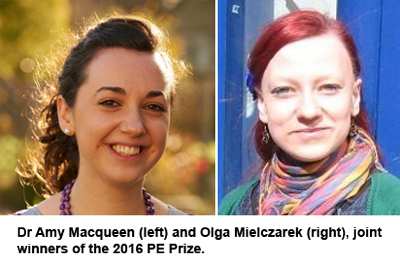 Amy, a member of the Okkenhaug lab, was acknowledged for her consistent support of the Institute’s PE programme across a number of years. She was recognised for the extent of her contribution to the development of the 2015 Royal Society Summer Science Exhibition, including take a leading role in the associated video. Amy is also an active PE Champion, supporting Institute staff and students to get involved and developing new ideas and projects.

Olga, a member of the Corcoran lab, was recognised for her work as a PE Champion for the Nuclear Dynamics programme.  In this role she encourages others to get involved in activities and was involved in the design and development of a DNA-packaging activity for the Institute’s Molecular Explorers exhibit.

Congratulations to all our winners! For more information on our PE and KEC activities see the Institute’s Impact pages.