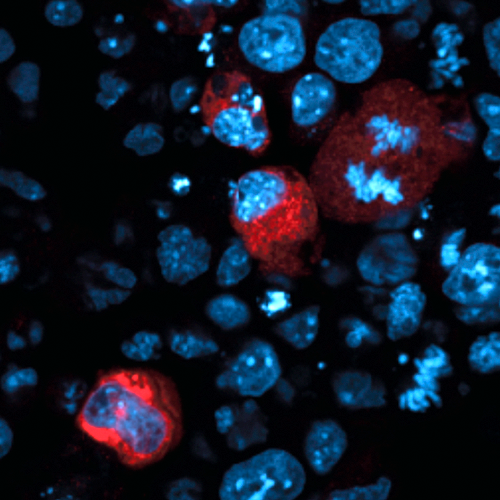 Molecules called endosiRNAs help us avoid genetic chaos, according to a new study from a team at the Babraham Institute. Much of the human genome contains pieces of DNA called transposons, a form of genetic parasite. When active, transposons can damage genes so it is important to keep them inactive. At a certain point early in the human life cycle controlling transposons is particularly difficult. This latest research, published today in Cell Stem Cell reveals how endosiRNAs keep our genes safe during this vulnerable stage.

Transposons, also called transposable elements, are ancient viruses that have become a permanent part of our genes. Around half of the human genome is made of transposons, many are damaged, but some can become active. Active transposons can be harmful because they move about the genome. When transposons move they can damage genes, leading to genetic illnesses and playing a part in some cancers.

Chemical markers in DNA called methylations can keep transposons inactive. Cells often use methylations to inactivate pieces of DNA, whether they are genes or transposons. Yet, in each new generation most methylations are temporarily erased and renewed by a process called epigenetic reprogramming. This means that, during sperm and egg production there is a short time when methylations do not control transposon activity, leaving them free to damage genes and shuffle DNA.

The new findings show that transposons become active when cells erase DNA methylation and they are shut down by the endosiRNA system. Just like active genes, active transposons produce messages in the form of RNA molecules, which have many similarities to DNA. The study reveals that cells can detect these transposon RNA messages and use them to create specific endogenous small interfering RNAs (endosiRNAs). The endosiRNAs then act like a trap allowing a protein called Argonaute2 (Ago2) to seek and destroy transposon messages before they cause any harm.

Speaking about the research, lead author on the paper, Dr Rebecca Berrens, said: “Epigenetic reprogramming plays a vital role in wiping the genome clean at the start of development, but it leaves our genes vulnerable. Understanding the arms race between our genes and transposon activity has been a long-running question in molecular biology. This is the first evidence that endosiRNAs moderate transposon activity during DNA demethylation. EndosiRNAs provide a first line of defence against transposons during epigenetic reprogramming.” 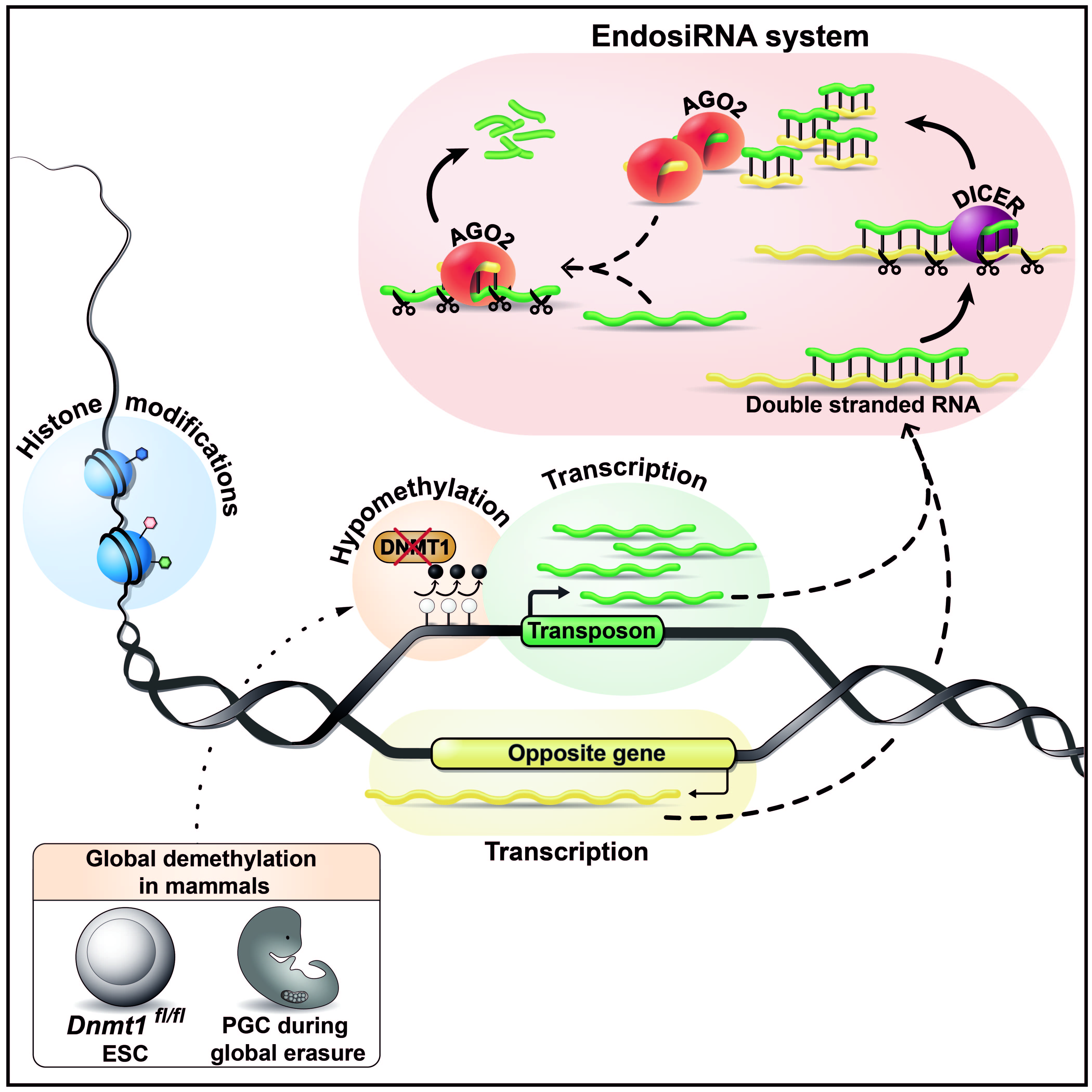 The effects of active transposons vary, often they have no effect, only occasionally will they alter an important gene. Yet, transposons can affect almost any gene, potentially leading to different kinds of genetic disease. Studying the control of transposons, adds to our understanding of the many ways that they can impact on human health.

This work highlights that a transposons often sit within genes and are read in the opposite direction to the surrounding gene. It is this arrangement that allows cells to identify RNA messages from transposons. RNA messages read from the same piece of DNA in opposite directions are complementary, meaning they can join to form a structure called double-stranded RNA (dsRNA), which initiates the creation of endosiRNAs.

Senior scientist on the paper, Professor Wolf Reik, Head of the Epigenetics Laboratory at the Babraham Institute, said: “Transposons make up a large part of our genome and keeping them under control is vital for survival. If left unchecked their ability to move around the genome could cause extensive genetic damage. Understanding transposons helps us to make sense of what happens when they become active and whether there is anything we can do to prevent it.”

Much of this research was carried out using embryonic stem cells grown in the lab, which had been genetically modified to lack DNA methylations. Natural epigenetic reprogramming happens in primordial germ cells, the cells that make sperm and eggs, but these are harder to study. The researchers used primordial germ cells to verify the key results from their study of stem cells.

Image Credit
Credit: R. Berrens
Header - Image of fluorescently labelled embryonic stem cells. These cells have been modified to mimic the effects of epigenetic reprogramming. DNA in the cells is marked in blue. Red indicates cells that contain active transposons.
Embedded - Graphical abstract of the key findings from the paper. The opposing directions of a transposon and a gene result in double stranded RNA that can be used to produce endosiRNA to prevent transposon activation. Credit: Veronique Juvin

Animal Statement:
As a publicly funded research institute, the Babraham Institute is committed to engagement and transparency in all aspects of its research. Animals are only used in Babraham Institute research when their use is essential to address a specific scientific goal, which cannot be studied through other means. The main species used are laboratory strains of rodents, with limited numbers of other species. We do not house cats, dogs, horses or primates at the Babraham Research Campus for research purposes.

Samples of primordial germ cells were collected from C57Bl/6J transgenic mice at embryonic day 13.5 and 14.5. The use of animals in this study was performed in accordance with the Animal (Scientific Procedures) Act 1986, and regulated by the Babraham Institute Animal Welfare and Ethical Review Body (AWERB). Experiments were planned and designed in accordance with the 3Rs.

Please follow the link for further details of the Institute’s animal research and our animal welfare practices: http://www.babraham.ac.uk/about-us/animal-research

About the Babraham Institute:
The Babraham Institute receives strategic funding from the Biotechnology and Biological Sciences Research Council (BBSRC) through an Institute Core Capability Grant to undertake world-class life sciences research. Its goal is to generate new knowledge of biological mechanisms underpinning ageing, development and the maintenance of health. Research focuses on signalling, gene regulation and the impact of epigenetic regulation at different stages of life. By determining how the body reacts to dietary and environmental stimuli and manages microbial and viral interactions, we aim to improve wellbeing and support healthier ageing.