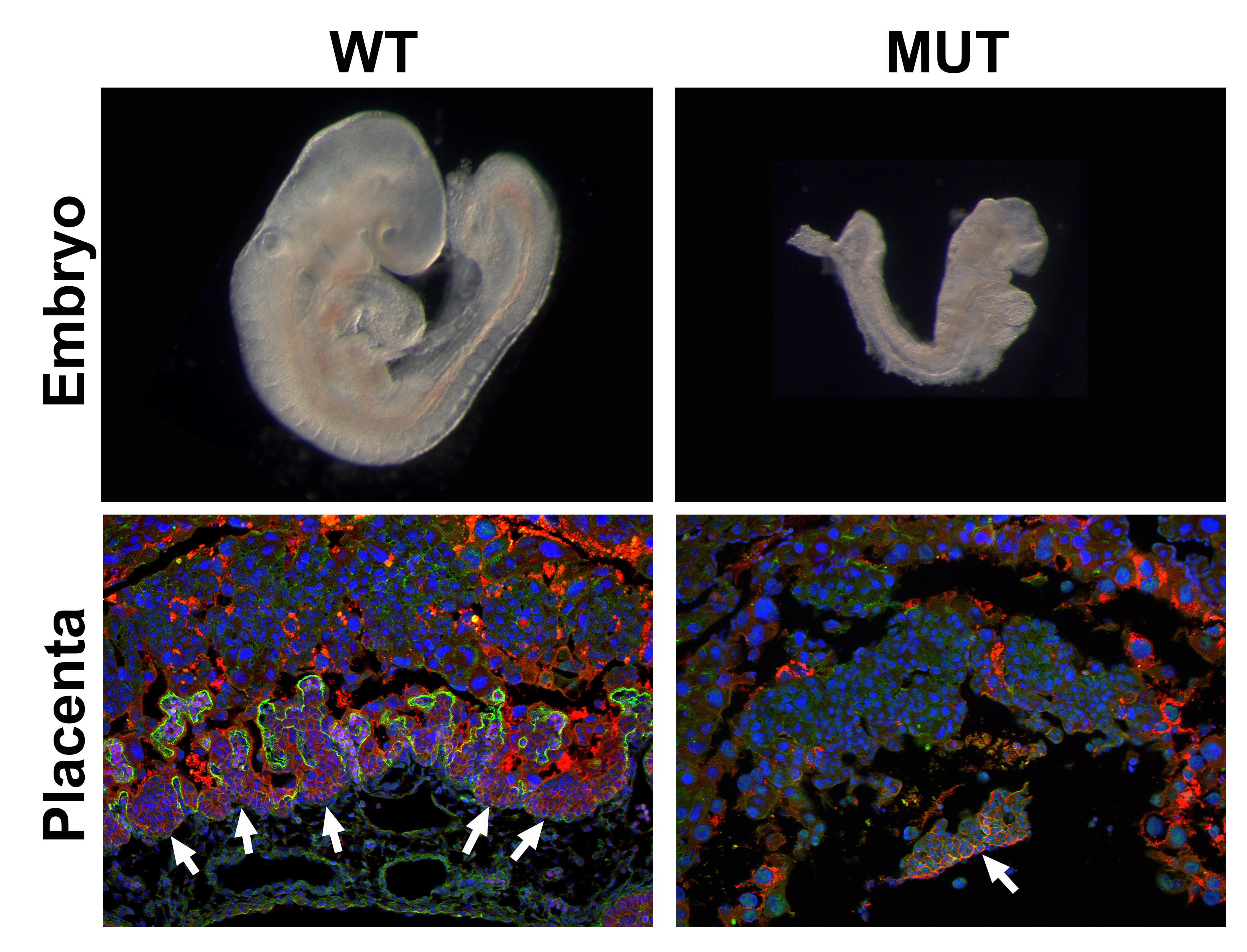 The role of the placenta in healthy fetal development is being seriously under-appreciated according to a new paper published today (14th March). The study was part of the Wellcome Trust-funded “Deciphering the Mechanisms of Developmental Disorders (DMDD)” consortium (dmdd.org.uk). Dr Myriam Hemberger at the Babraham Institute, Cambridge led the research, working with colleagues at the Wellcome Sanger Institute, Cambridge, the Francis Crick Institute, London, the University of Oxford and the Medical University of Vienna, Austria. Writing in the journal Nature, the team studied 103 genetic mutations in mice that cause embryos to die before birth. The results showed that the majority, almost 70%, cause defects in the placenta.

Each of the 103 gene mutations causes the loss of a particular factor. Many of these had not been previously linked to placenta development, and hence the study highlights the unexpected number of genes that affect development of the placenta. By studying a select group of three genes in further detail, the team went on to show that the death of the embryo could be directly linked to defects in the placenta in one out of these three cases. This may mean that a significant number of genetic defects that lead to prenatal death may be due to abnormalities of the placenta, not just the embryo.
Although this research uses mice, the findings are likely to be highly relevant to complications during human pregnancy and the study highlights the need for more work to be done on investigating development of the placenta during human pregnancies.

The placenta is vital for normal pregnancy progression and embryo development in most animals that give birth to live young, including humans. It provides a unique and highly specialised interface between the embryo and the mother, ensuring an adequate provision of nutrients and oxygen to the embryo. The placenta is also involved in waste disposal from the embryo and produces important hormones that help sustain pregnancy and promote fetal growth. Although previous research has highlighted the pivotal role of the placenta for a healthy pregnancy, its potential contribution to pregnancy complications and birth defects continues to be overlooked.

Scientists call mutations that cause death in the womb embryonic lethal. Mouse lethal genes are enriched for human disease genes and the affected embryos often show morphological abnormalities, i.e. changes to their shape and structure. Around one-third of all gene mutants studied in mouse are lethal or subviable (i.e. mutant offspring are less likely to survive than non-mutant pups).

The DMDD consortium investigates the detailed morphological abnormalities in the embryo caused by such gene mutations. Importantly, the DMDD programme includes analysis of placentas from these mutants. Through this uniquely comprehensive assessment, the team was able to show a significant co-occurrence of placental defects alongside abnormalities in the brain, heart and vascular system.

The co-first authors on the paper are Dr Vicente Perez-Garcia and Mrs Elena Fineberg. Dr Perez-Garcia, said: “Analysis of embryonic lethal mutants has largely focused on the embryo and not the placenta, despite its critical role in development. Of the mutations we’ve studied, far more than expected showed defects in the placenta and this is particularly true for mutations that cause death during the early stages of pregnancy. Intriguingly, our analysis also indicates that issues in the placenta often occur alongside specific defects in the embryo itself.”

The senior researcher on the study was Dr Myriam Hemberger, Group Leader in Epigenetics at the Babraham Institute. Dr Hemberger, said: “Our data highlight the hugely under-appreciated importance of placental defects in contributing to abnormal embryo development and suggest key molecular nodes governing placentation. The importance of a healthy placenta has often been overlooked in these studies and it is important that we start doing more to understand its contribution to developmental abnormalities.”

The placenta-focussed aspect of the DMDD project was carried out at the Babraham Institute where all mutant placentas were analysed and characterised for their morphological defects. The Institute researchers also carried out work using mouse placental stem cells to understand further the functional roles of particular genes in the development of this organ. The mutant mouse lines were produced and bred at the Wellcome Sanger Institute. The detailed morphological analysis of embryos was performed by Dr Tim Mohun at the Francis Crick Institute together with colleagues at the Division of Anatomy, Medical University of Vienna, Austria.

Research Funding
Work at the Babraham Institute is possible thanks to the Biotechnology and Biological Sciences Research Council (BBSRC). This work is part of the Wellcome Trust Strategic Award ‘Deciphering the Mechanisms of Developmental Disorders (DMDD)’.

Image
Mouse embryos part way through development (top) showing a normal embryo and an embryo with a mutation in the Nubpl gene, which affects development and leads to pre-natal death. Lower images show cells in the corresponding placentas. The green staining marks the exchange surface where nutrients are transferred between the mother and embryo; note that this layer is missing in the Nubpl mutant placenta. Red staining shows the cells underlying the exchange surface, these are also mostly missing in the mutant placenta.

About the Babraham Institute:
The Babraham Institute receives strategic funding from the Biotechnology and Biological Sciences Research Council (BBSRC) to undertake world-class life sciences research. Its goal is to generate new knowledge of biological mechanisms underpinning ageing, development and the maintenance of health. Research focuses on signalling, gene regulation and the impact of epigenetic regulation at different stages of life. By determining how the body reacts to dietary and environmental stimuli and manages microbial and viral interactions, we aim to improve wellbeing and support healthier ageing. Follow us on Twitter at @BabrahamInst

About the Sanger Institute:
The Wellcome Sanger Institute is one of the world's leading genome centres. Through its ability to conduct research at scale, it is able to engage in bold and long-term exploratory projects that are designed to influence and empower medical science globally. Institute research findings, generated through its own research programmes and through its leading role in international consortia, are being used to develop new diagnostics and treatments for human disease. To celebrate its 25th year in 2018, the Institute is sequencing 25 new genomes of species in the UK. Find out more at www.sanger.ac.uk or follow @sangerinstitute

About the Francis Crick Institute:
The Francis Crick Institute is a biomedical discovery institute dedicated to understanding the fundamental biology underlying health and disease. Its work is helping to understand why disease develops and to translate discoveries into new ways to prevent, diagnose and treat illnesses such as cancer, heart disease, stroke, infections, and neurodegenerative diseases.
An independent organisation, its founding partners are the Medical Research Council (MRC), Cancer Research UK, Wellcome, UCL (University College London), Imperial College London and King’s College London.

The Crick was formed in 2015, and in 2016 it moved into a brand new state-of-the-art building in central London which brings together 1500 scientists and support staff working collaboratively across disciplines, making it the biggest biomedical research facility under a single roof in Europe.