2022 marks my eighteenth year at the Babraham Institute. It now feels like I have been working here for a considerable amount of time and the photograph on my security pass is now a mocking reminder of more youthful days. Another reminder is my eldest son, now officially an adult, but not yet born when I began my tenure as the Institute’s Imaging Facility Manager. Like my son, the Facility is also 18 years old this year, and has grown considerably during this time. At its inception, the term 'Imaging Facility' would be rather generous to describe what I was managing. It was actually a room containing two microscopes, neither of which were very well suited to a multi-user environment catering for a broad spectrum of Institute science. Contrast that with 2022 where we now have three members of staff looking after twelve advanced imaging systems spread across eight rooms, it’s easy to see how things have progressed.

The growth of the Facility has reflected the need to cater for an expanding user base and to provide those users with the latest cutting-edge technologies. Indeed, one of the biggest challenges with any technology-based Facility is keeping the equipment up-to-date so that researchers have access to the best tools to progress their science. Imaging is no exception, with continual improvements in speed, sensitivity and resolution. Taking this latter point as an example, in 2004 it was universally accepted that light microscopy was fundamentally limited in its resolution by diffraction; fast forward to 2022 and there are all kinds of super resolution imaging methods available which image below the diffraction limit.

Over the last 18 years, the Facility has undergone notable phases of growth and rejuvenation, the most recent happening during lockdown. In 2020, the BBSRC invited the Institute to submit proposals to fund capital equipment. The Institute recognised the need to overhaul our imaging resources, which had seen little investment in light microscopy since 2012. I wrote two proposals, with the primary aim of bringing our core imaging resources up to date, replacing or upgrading the heavily used workhorse instruments that the majority of our users rely on. Remarkably, both proposals were funded, so much of the latter half of 2020 was spent working on system specifications and trying to maximise the impact of the investments.

Few benefits came from lockdown, but one advantage of a quiet Facility meant that relatively few people were impacted by the major disruption that ensued when the new equipment arrived in the spring of 2021. Over a period of ten weeks, four imaging rooms were successively taken out of action while systems were dismantled and removed, and new ones brought in and assembled. At the end of this process the Facility has been left with three new confocal imaging systems, a new super resolution imaging system and a new wide-field imaging system for fluorescence and colorimetric histology. Other enhancements include a new cryostat, a new robotic plate loader for automated high throughput imaging, two new analysis workstations and new ergonomic chairs throughout. These new capabilities have brought our Facility back to up to date and we can now offer Institute and Babraham Research Campus users access to some of the most advanced light microscopy technologies available.

Just as the dust began to settle, the next call for capital equipment came from BBSRC. Given that we had replaced most of the key technologies underpinning the Facility’s day-to-day operations it was time to think about more specialised equipment. One of the limitations of our existing systems is the number of fluorescent labels that can be imaged in a sample. This is usually in the range of four up to seven, depending on the particular platform being used. This is sufficient for many applications, but can be a major limiting factor, particularly when studying complex tissues. It is like trying to work out the picture on a jigsaw puzzle with most of the pieces missing, or understanding a sentence where only four of the same letters can been seen. The solution is simple: a system where you image four fluorescence labels, but then you remove them, add another four and re-image. This cycle is then repeated as many times as required to build up the full picture, or complete the full sentence. Such a process is implemented in a new generation of “ultra-high content” imaging platforms, and this was the focus of the new capital equipment proposal. Our proposal was funded, and a Miltenyi MACSima system arrived at the beginning of March 2022, with the primary aim of supporting the science in our Immunology research programme.

So what does the next 18 years have in store?

The only thing I am certain of is that in 18 years’ time I will not be celebrating my 36th anniversary at the Institute with my 36 year old son! In the immediate future, I am looking forward to expanding the Facility team with new positions due to start before the end of the year, and the never-ending cycle of replacing and upgrading continues with new proposals in preparation to improve our long-term live cell imaging capabilities and update our high content imaging platform.

Longer term, the challenge is to maintain the levels of investment required to keep our resources at the cutting edge, and more importantly, ensure the Facility remains relevant to Institute science. This requires a constant process of re-evaluation and re-invention, so that the latest techniques and technologies are available to meet our scientists’ needs. One trend that I can see is the distinctions between facilities blurring: spatial transcriptomics is merging sequencing with imaging, ultra-high content imaging is essentially spatial cell cytometry, flow cytometry can incorporate image-based detection, mass spectrometry imaging has introduced a spatial component to mass spec analysis. How our existing facilities will adapt to this remains to be seen, but visualising the microscopic processes of biology that are essential to life will remain a critical part of research for the foreseeable future and that is something I am excited to be a part of. 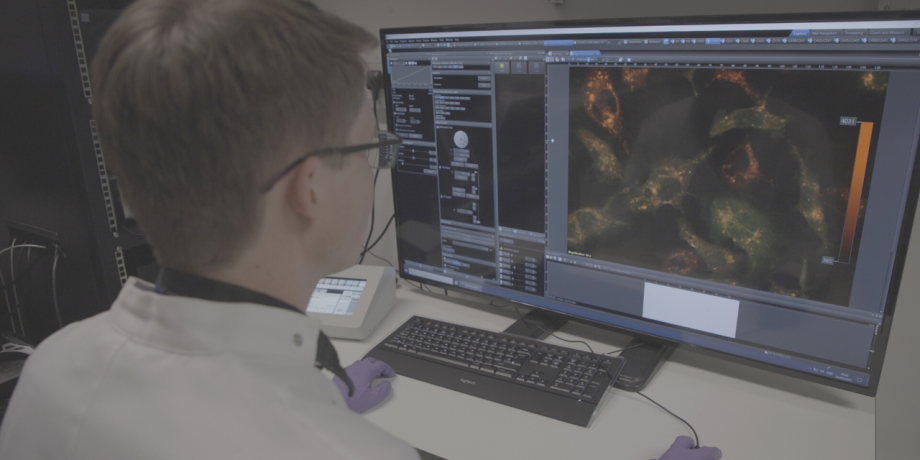 Watch our video intro to the Imaging Facility

Find out more about the expertise of our Imaging Facility