Making the Most of Signalling Research

Making the Most of Signalling Research

Bringing together the Institute’s researchers with scientists in the 60 companies on the Babraham Research Campus is helping turn innovative ideas into new benefits for human health – fast. Over the past two years, members of the Signalling research programme have transformed a conversation over coffee into a collaboration that could deliver new ways of treating some of the most intractable human cancers. 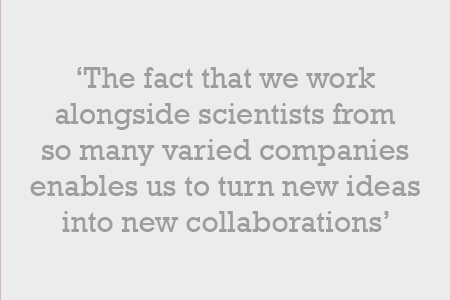 As Dr Simon Cook has discovered, caffeine can be a powerful catalyst. In the past 18 months, what began as a conversation over coffee with scientists from PhoreMost – one of the 60 biotech companies that share the Babraham Research Campus – has developed into a collaboration that could yield new ways of treating some of the most intractable human cancers.

Simon, a group leader in the Institute’s Signalling research programme, works on protein kinases. By attaching phosphate groups to cellular proteins, these enzymes help to form our cells’ communication system, switching on and off their most basic functions – from surviving or dying to dividing and differentiating.

“We’ve been interested in one of these pathways, called ERK, for many years,” he says, “partly because we want to understand its basic biology – how it controls cell division, survival and differentiation – but also because the gene that controls this pathway, KRAS, is one of the most common oncogenes in human cancer.”

In fact, KRAS mutations are responsible for almost 30% of all human cancers, including 25% of non-small cell lung cancer, 40% of colorectal cancer and up to 90% of pancreatic cancer, which remains one of the hardest of all cancers to treat. But although scientists have known for more than 30 years that mutations in KRAS cause cancer, they have struggled to develop drugs that inhibit KRAS.

The biggest barrier is KRAS’s biochemistry. “It’s properties are unique. It binds to a co-factor called GTP, which in an ideal world would make a good drug target,” Simon explains. “But the affinity with which it binds is so tight – and it’s such a small protein – that it’s always been viewed as un-druggable.”

All that could be set to change thanks to the unique environment of the Babraham Research Campus. Just metres away from Simon’s lab – which has over 25 years experience in KRAS biology – is the innovative drug discovery company PhoreMost. Spun out of the University of Cambridge in 2014, PhoreMost has developed a completely new way of screening diseased cells to find hidden targets that can then be turned into drugs for previously untreatable diseases.

It’s hard to imagine a more promising pairing. “PhoreMost are literally next door to my lab – we often bump into them over coffee – so I knew about their technology. They can interrogate novel druggable spaces in proteins that conventional drug discovery hasn’t been able to find – and we had the targets they needed,” Simon recalls. “Using their SITESEEKER platform to find a new druggable space for the KRAS pathway we’re studying seemed like a perfect partnership.” 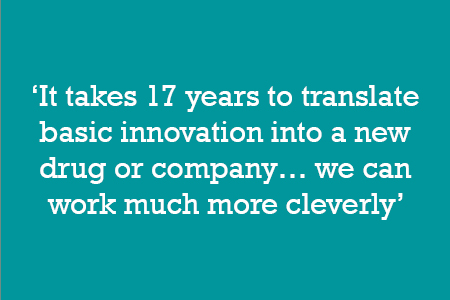 So after coffee and conversation, Simon took advantage of the Babraham Research Campus Collaboration Fund (BRCCF) – a scheme that encourages collaboration between Institute researchers and their neighbouring biotech companies – to set up a collaboration. And after successfully showing that they could build Simon’s knowledge of KRAS into PhoreMost’s screening technology, they were awarded £600,000 funding from Innovate UK in 2017 to get a new procedure up and running.

Nine months on and Simon’s team are close to perfecting a system with PhoreMost. The new cell line will be able to indicate whether or not a molecule has inhibited the KRAS pathway by living or dying. When KRAS is switched on, the cells die; conversely, anything that inhibits KRAS means the cells survive. These cells can then be studied to find out exactly what protected them.

“The first step is using PhoreMost’s technology to find these cryptic spaces on KRAS that have defied conventional drug discovery,” he explains. “Our dream is that if we find things binding to KRAS, we can work with crystallographers to discover where it’s binding. And once we know the structure, we can design a drug-like molecule that does the same thing.”

If the collaboration ultimately leads to new drugs for diseases like pancreatic cancer, it will mark an extraordinary advance. But it’s the huge potential that this way of working represents that’s the real game changer, Simon believes.

“I’m a great believer in publicly funded research – the Institute does world-class research on a budget and because our funding comes from taxation we have a duty to squeeze every possible impact out of it. The fact we work alongside scientists from so many varied companies enables us to turn new ideas into new collaborations.”

Working this smartly radically speeds up the time it takes to turn new knowledge into impact. “On average it takes 17 years to translate basic innovation into a new drug or company. That’s too long and too random,” Simon concludes. “The Babraham Research Campus shows that we can work much more cleverly. Here, we can facilitate and accelerate – funding basic bioscience and bringing people together who might otherwise never have talked.”

This feature was written by Becky Allen for the Annual Research Report 2017
Image kindly provided by PhoreMost.