Ensuring that the Institute’s world-leading research has a direct impact on people’s health means translating – and contextualising – our science for many audiences. For parliamentarians and policy makers, healthy ageing is among the 21st century’s most pressing problems. So as well as pioneering research on healthy ageing, we’re ensuring science is accessible to decision makers through our knowledge exchange programme. 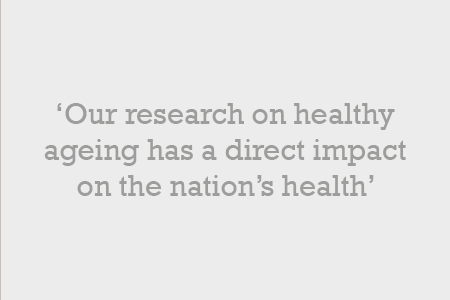 Across a handful of generations, average life expectancy in the UK has doubled. A baby girl born in 1841 could expect to live just beyond her 42nd birthday; one born in 2016 can expect to live until the age of 83. This extraordinary change is a triumph of public health; but it also presents major health and social challenges. Today, longer life expectancy is associated with increasing incidence of chronic diseases, from dementia and diabetes to arthritis and cancer, putting pressure on unpaid carers as well as health and social services.

Helping people remain healthier for longer is key to addressing these issues, and the Institute plays a pivotal role in advancing fundamental scientific knowledge and making it available to decision makers. Healthy ageing research spans and unites the Institute’s scientific themes. Our aim is to understand how our bodies change as we age and how this impacts our lives so that science can inform lifestyle changes, policies and treatments to help people stay healthier as they get older.

For the past 30 years, the Institute has pioneered research into epigenetics – the mechanisms that control the way our genes function – revolutionising our concept of healthy ageing biology. In 2017, for example, Institute researchers identified a mouse epigenetic ageing clock and showed that lifestyle changes known to shorten lifespan, including a high fat diet, sped up the clock.

Doing ground-breaking science, however, is not enough. To maximise the impact of our research, we have to make it accessible to parliamentarians and policy makers, and last year Professor Wolf Reik and Dr Jon Houseley of the Epigenetics research programme contributed to a new POSTnote.

POST – the Parliamentary Office of Science and Technology – provides balanced, accessible overviews of scientific research. One of the tools it uses to put research into a policy context that can be used in Parliament is the POSTnote. These concise peer-reviewed briefings distil literature reviews and interviews with academic, industry, government and third sector stakeholders. In 2017, Sarah Worsley, a third-year PhD student at the University of East Anglia spent three months as a NERC-funded intern at POST, producing a POSTnote on the biological basis of ageing and how the ageing process can be manipulated to promote better health later in life.

“Collating 30 interviews into a four-page briefing and explaining complex science for an audience that has no knowledge of biology is challenging,” Sarah explains. “Visiting scientists at the Babraham Institute, Newcastle University and the University of Southampton was vital to get the background to the biology of ageing. They told me about their work, and where they thought it fitted into policy and treatments for age-related diseases.”

The POSTnote introduces the idea of biological versus chronological age, the epigenetic clock, and considers potential therapies and public health policy interventions opening up through this research. “Scientists are beginning to understand the processes that occur in our bodies that cause ageing – the damage that accumulates over time which causes ageing and age-related disease. The interest now is to look for ways to reduce this damage, either via new drugs or changes in lifestyle,” she says. 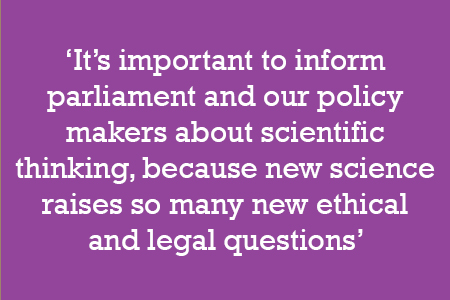 The POSTnote, published in February 2018, will be used by parliamentarians and policy makers who will be increasingly called on to regulate new drugs and set new directions in public health, ensuring that the Institute’s research has a direct impact on the nation’s heath. “Nutrition and other environmental factors influence the epigenome and can have long lasting consequences, not only for our health but that of future generations,” says Wolf.

As well as public health and the development of new drugs, his research has other less obvious yet far-reaching implications, he adds: “Insurers might be very interested in people’s biological age, which raises many policy questions. And if it’s possible to influence the ageing process with drugs in the future, I think this has broader implications for population structure.”

Being involved in research that’s likely to have profound impacts on society as well as health makes him think about his science from new perspectives. “It makes us frame questions in a different way,” he says. “It’s important to inform parliament and our policy makers about scientific thinking, because new science raises so many new ethical and legal questions.”