Unlocking the secrets of early development

Unlocking the secrets of early development

Every cell type in our body results from a different reading of the same genome. Over the past 30 years, scientists have learned that our genes are controlled by epigenetics – a combination of processes that switch genes on and off without altering the DNA sequence itself. But much of epigenetics remains a mystery. The Institute’s Epigenetics programme is exploring the earliest stages of life and how understanding this could help reprogramme cells for regenerative medicine applications in the future. 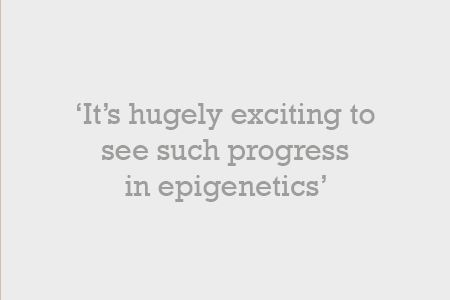 From neurones and hepatocytes to lymphocytes and erythrocytes, our bodies contain more than 200 different types of cell. Thanks to them, we can perform the myriad functions necessary to survive, thrive and reproduce. But how does this extraordinary diversity develop from one cell type – the zygote – when most of our cells contain the same genetic information?

It’s a puzzle Professor Wolf Reik, head of the Epigenetics research programme, has been working on for the past 30 years. “Every cell in the body contains the same DNA, so there must be something else that interprets it in a different way,” he explains. “This ‘something else’ is actually several things – transcription factors, proteins on the DNA that switch genes on and off – and it’s also epigenetics.”

Literally meaning ‘on top of our genes’, epigenetics refers to an extra layer of control achieved by annotating our DNA with a series of tags, such as the simple methyl group of one carbon and three hydrogen atoms. It’s thought that each cell type has a different set of tags – a different epigenome. Akin to highlighting recipes in a cookbook that together form a specific menu you want to create, each epigenome enables a specific cell type to develop by ensuring that only genes relevant to that cell type are switched on.

As well as enabling cell differentiation, the system must also be heritable, so that as we grow and repair ourselves, our cells and organs retain their individual identities. “There is a memory in the system, and that’s important,” says Reik. “As a liver cell divides, it needs to remember that it’s a liver cell, and epigenetics helps with that.”

Equally importantly, the system must be able to forget, so that when we produce eggs and sperm, the newly developing embryo can start the development process afresh. “This is vital because after fertilisation, new embryos must undergo this process of diversification again, building new cell types and new organs. Without erasing the cells’ memory, the whole thing might become confused and lead to developmental problems and abnormalities,” he says.

Reik’s group is particularly interested in the epigenomes of stem cells, extraordinary cells with the capacity to develop into any type of cell in the body, and which are present in early embryos. By studying these cells, they are discovering how epigenetic information affects the way that important organs – such as the placenta, heart and brain – function throughout our lives. “It’s a hugely exciting area for us now,” he says. “In early development, once you get away from all the cells looking the same, you have to make different cells to produce a body with all its constituent parts. How this happens is a huge, unresolved question.” 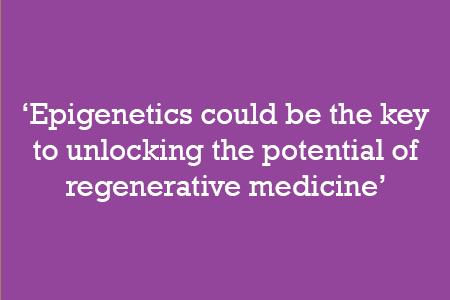 To answer that question, the researchers at the Institute have developed pioneering new single cell technologies able to read the epigenome of an individual cell, without which it would be impossible to tease out how stem cells decide whether to become a blood cell or a brain cell, for example. They also want to answer two other key questions: how the global erasure process works, and how epigenetics affects ageing, both of which have major implications for maintaining health and managing disease.

For many years, regenerative medicine – using our own cells to repair or replace damaged or diseased cells – has offered a promising way of treating devastating diseases such as Parkinson’s and multiple sclerosis. It’s becoming clearer that it is epigenetics that could be the key to unlocking the potential of regenerative medicine.

So-called embryonic stem cells and induced pluripotent stem cells are the holy grail for regenerative medicine, but many questions remain, including how to ensure that the memory of cells used in therapies have been wiped clean. “For us, epigenetic memory is a problem that lurks in these cells,” says Reik. “They are derived from skin and other cells but if they retain some epigenetic memory of where they come from, this could affect how well they perform in patients.”

As well as discovering how cells erase their epigenetic memories, the Institute’s researchers are also investigating links between ageing and epigenetics. It’s now thought that together with our chronological age, we have an epigenetic age influenced by our diet and environment. According to Reik: “We are interested in how the epigenetic clock ticks and how it affects the ageing process. We hope that by manipulating the ticking rate, we can have an effect on ageing.”

“As someone who has been in this field since before it was called epigenetics, it’s hugely exciting to see such progress. Instead of phenomena that couldn’t be explained, we now have molecules, mechanisms and the possibility of manipulating them in animal models and – potentially – in patients in the future.”