In 1796, a doctor in rural Gloucestershire took pus from a cowpox lesion on a milkmaid’s hand to inoculate an eight-year-old boy against smallpox. More than 230 years after Edward Jenner’s pioneering vaccination, we still don’t fully understand how our immune system works. Now, researchers in the Institute’s Immunology programme have uncovered a new layer of regulation in immune cells – a discovery that could have far-reaching implications for vaccines, cancer and healthier ageing. 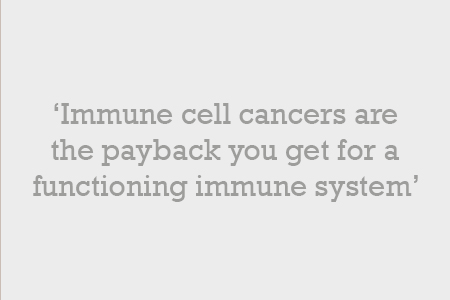 Our immune system does a remarkable job of defending us against germs, repelling invaders and keeping us healthy. A key part of this system are our B cells – highly specialised cells capable of responding to myriad disease-causing pathogens. Not only are they hugely diverse in the pathogens they recognise, they can remember the pathogens we have been exposed to in the past, providing us with immunity against future attacks.

The vast repertoire of responses that these cells possess is due to their unique ability to cut up and rearrange their own DNA. “This variable-diversity-joining recombination only happens in these cells,” says Dr Martin Turner of the Immunology research programme, who wants to get to the bottom of when this takes place, and how the mechanism works.

B cells develop in a sequence. During the process, there are several discrete stages where DNA is broken and re-joined, allowing the cells to produce the many different antibodies we need to protect ourselves from many different infections. Rearranging DNA, however, is a risky process.

Breaking DNA at the wrong point in the sequence can cause cells to die, and making mistakes when re-joining DNA can lead to even more sinister consequences. When this happens, the mutated genes can create cancer-causing immune cells, resulting in diseases such as lymphoma and leukaemia. “Immune cell cancers, such as lymphomas and leukaemias, are the payback we get for a functioning immune system,” he explains. “The good news is that knowing more about this DNA re-shuffling mechanism, including what happens when it goes wrong, means that in the future we’ll be able to treat these types of cancers better.”

During their development, B cells switch very rapidly between periods of quiescence (or rest) and proliferation. When they are resting, they cut up and rearrange their DNA, but as soon as this happens there is a rapid burst of cell proliferation. The problem is that DNA works too slowly to explain this switch. “DNA is very stable, it’s not a very dynamic on/off switch, yet we know that cells do things very rapidly,” he says.

So what is switching cells between quiescence and proliferation – and back again? Received wisdom is that all the necessary information is encoded in the DNA and that you just need to look hard enough to find all the answers. Turner argues that there is another layer of regulation, and is now providing evidence that it exists, and that it has important consequences: “Many people argue that to regulate gene expression, all you need to do is regulate the tempo of what goes on at the DNA level. What we’re working on is a bit left field, it challenges the orthodoxy about how things work.” 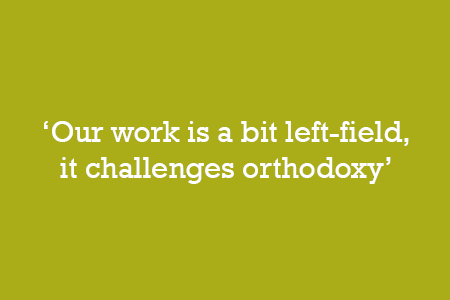 The Institute’s Immunology programme has discovered that the process involves a group of cell cycle proteins known as RNA binding proteins. These act as a switch by affecting the stability of RNA, a single-stranded nucleic acid, and silencing the cell signals promoting proliferation. The same mechanism could also be important in other cell types. According to Turner: “It’s an interesting basic biological question, but there are good reasons why we need to understand the biology of these cells.”

B cells are what enable our immune system to remember past experiences, so knowing how they work is crucial for understanding vaccine responses and immunological memory. Turner’s latest work shows that RNA binding proteins help limit the intensity of the immune response, which ensures that the system isn’t activated inappropriately and that it shuts down as soon as it has fought off a pathogen such as influenza.

“When the ‘flu has been got rid of, you want the immune system to stop because it’s the immune response that makes you feel unwell,” he says. “The same is true of many diseases. In evolutionary terms, there’s been a trade-off between how actively the immune system attacks an infection and the damage that it causes the body. It’s about optimising that balance.”

Knowing that preventing cell proliferation is an active, rather than a passive, process is important in cancer research – and could also be crucial in understanding ageing. We are born with a limited supply of stem cells which we rely on to repair damage, so the body needs a mechanism to ensure these cells are used as sparingly as possible. “The balance between quiescence and proliferation is important, because the pool of stem cells becomes depleted if it’s not kept quiescent,” he concludes. “Maintaining quiescence is fundamental to the ability to rejuvenate. We know that the ability to rejuvenate deteriorates with age, so if we understand the process better, this could make for healthier ageing.”