CRISPR/Cas9 technology has made eliminating gene expression in cells routine, making KO models for research. This is because CRISPR/Cas9 can create double stranded breaks (DSB) nearly anywhere in the genome. SgRNA can positioned in specific places within a gene to prevent the targeted gene from producing any protein (Figure 1). This document will discuss different approaches in making KO mode.

The most classical way of creating a KO model is by removal of a critical exon. The critical exon is an exon not divisible by 3. If it is divisible by 3, then removing the exon will not cause a frame shift but if it is not then a frame shift will occur and result in a premature stop codon (PTC) at some point. A premature stop codon within a transcript will cause it to be degraded by non-sense mediated decay (NMD) (Figure 1). 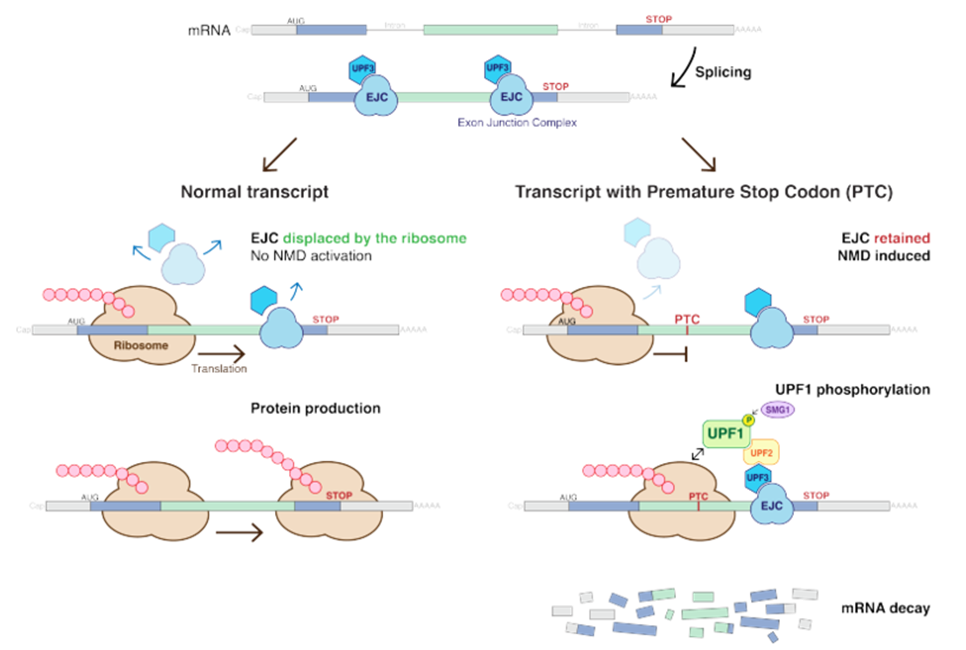 This method originates from the EUCOMM projects where critical exons are flanked by loxp sites. It should be noted that the critical exon should not be an early or late exon as they could be alternative promoters or alternative final exon. To remove the exon, we use two sgRNA that flank a critical exon (Figure 2B). However, deletion of the critical exon is not always guaranteed as you can get indels at the cut site. Thus, it is important to genotype by doing a PCR reaction over the deletion site to confirm deletion.

Another way of creating a KO model is by putting indels within a gene, which can routinely be done with CRISPR/Cas9 (Figure 2C). These indels will cause a frameshift and lead to a premature stop codon. It should be noted that not all indels will cause a frameshift such as deletions divisible by 3. This can be checked by doing a PCR over the sgRNA cut-site and doing sanger sequencing.

The Sanger sequencing file will come back with multiple peaks and needs to be deconvoluted using Synthego ICE analysis, an online tool (Figure 3).

Positioning of the sgRNA is important as you want it positioned deep with the coding gene to cause maximum disruption. Positioning too early would allow alternative promoters to bypass the indel. Also positioning too late, may not cause NMD as the premature stop codon would be towards the end of the transcript.

Both methods can create KO cell and have their own advantages and disadvantages, which have been summarized in table 1 below.