The Turner group aims to characterise fundamental mechanisms controlling lymphocyte development and function throughout the life-course. These include understanding the roles of RNA binding proteins in lymphocyte development and activation.  In the future explaining how these are integrated with signal transduction pathways, microRNA and transcription factor networks will be an important step towards a systems level understanding of immunity. Genetically modified mice in which the functions of signalling pathways and RNA–binding proteins can be controlled by conditional mutagenesis are one important research tool required for this understanding. Additionally, we are developing tools for measuring gene expression in rare cell populations. We also use genome wide approaches to study RNA turnover and translation and to identify the targets of RNA binding proteins. Our approach trains individuals who can combine bioinformatics, molecular, cellular and in vivo skills to tackle biological questions.

Circulating lymphoblasts in a peripheral blood smear from a mouse lacking both TIS11b and TIS11d in T cells.
TIS11b and TIS11d are RNA-binding proteins which regulate mRNA degradation and translational repression. 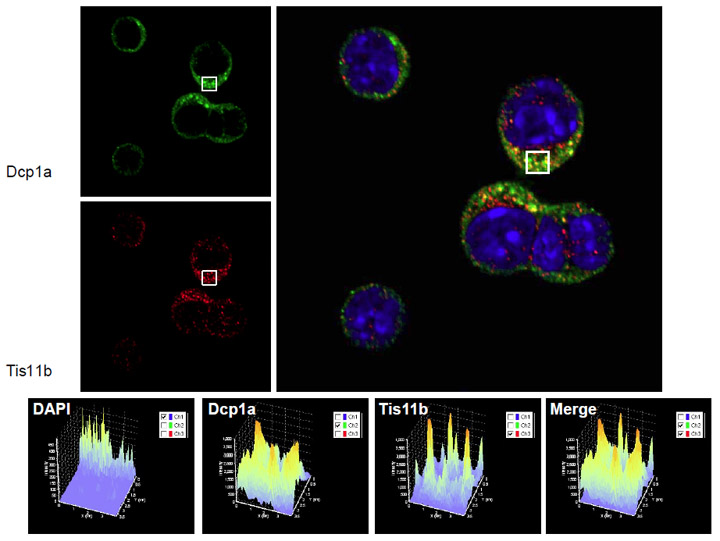 Tis11b has been shown to be a component of processing bodies, RNA protein complexes which mediate RNA decay.
This image shows localisation of TIS11b with the decapping enzyme Dcp-1 in activated lymphocytes.
The function of processing bodies in lymphocytes is unknown and is under investigation in the laboratory.