‘We need to talk’: how and why cells communicate and what happens when things go wrong

‘We need to talk’: how and why cells communicate and what happens when things go wrong

If you have ever been a part of a team, you will know that communication is of the utmost importance. The same goes for the cells that make up our bodies, they are all part of a team with trillions of members all with the goal of keeping us healthy. If you thought of cells as static and unconscious building blocks – think again!

Our cells are part of ‘micro societies’ which are constantly adjusting to the environment sending and receiving millions of signals in the form of chemical molecules. This complex exchange of chemical messages is essential for the survival of an organism and must be tightly regulated because any mistakes can cause severe disease. In this post, we are going to take you through the types of cell signalling, the importance of this communication and what can happen when things go wrong.

Signals sent and received are crucial for the development of tissues, organs and whole organisms. Communication is a must during the whole life of an organism, so cells and tissues can alert their neighbours about any needs or information they have like "I need some oxygen over here", "I am an eyeball, so you don't need to be" or "I need some help, bacteria are attacking me”.

But getting those messages from cell A to cell B follows a ‘simple’ process. Cell A needs to secrete the signal. These signalling molecules, which are also called ligands, act like a postman bringing that message to its destination. The signalling molecule could be a protein, a lipid, hormones, growth factors or even neurotransmitters. Finally, cell B needs a receptor so that the signalling molecule can bind to it. Think of the receptor like the mailbox the postman needs to deliver your post safely and successfully.

It is very important that not all cells respond to the same signals. Each receptor is unique to a particular signalling molecule and only a cell that has that particular receptor will be able to receive that message, which works like a key and a keyhole model.

But what happens once the signal finally binds to the receptor and makes its way from the outside of the cell, through the membrane to the inside? From now on, the game of Chinese whispers starts! By activating the receptor, cell B can now launch a cascade of different events that can spread the message throughout different parts of the cell so that the cell can respond appropriately.

The signal often goes to the nucleus, but it can also target different cell structures. It can have a highly complex journey via many proteins in the cytoplasm. Each protein can modify the next one differently (e.g., attaching a phosphate group in a process called phosphorylation). The whole journey makes a specific signalling pathway, which can branch up in different directions and become very complex. Once signal reaches its target molecule, it can change the cell's behaviour, the cell can respond in dividing, moving, or even dying (via a process called apoptosis), and many other ways.

The cells in our body are part of a team of trillions of members all working together. Unsurprisingly, not all cells sending and receiving messages are next-door neighbours. Broadly speaking, the sequence of cell signalling remains the same but types of chemical signalling can come in different categories, with the main difference being the distance the signal has travelled to reach the target cell. Let’s start with the shortest one.

Sometimes cells can produce signals that bind to receptors on their own surface. This makes it possible for cells to send messages to themselves – the equivalent of leaving yourself a note to remind you of something later on! This is called autocrine signalling, and while it sounds a little strange that a cell would want to communicate with itself, it is essential during development as it ensures correct cell division and maintaining their cell identity.

Sometimes you do just want to send a message to your neighbours. Cells that are in direct contact or are situated very close to each other can be connected by gap junctions. This is called juxtacrine signalling and allows signalling molecules to easily pass through these junctions to neighbouring cells. This means that a group of cells can respond to a signal received by just one cell.

Paracrine signalling happens between two nearby cells that are not connected. The signalling molecules in this case are able to diffuse across short distances to pass the message on. Talk between neurons is a great example of this. Neurons release neurotransmitters into a gap known as a synapse so that the message can be passed onto the next.

Finally, there is endocrine signalling for messages that need to travel the longest distances. Like a package that needs to be shipped internationally, these signalling molecules need to travel through the bloodstream to reach their target destination. These signals are hormones. One example is adrenaline which is produced near the kidney. It is involved in our fight or flight response so quickly needs to be redistributed to our muscles as well as our heart as it increases our heart rate.

Cells need to be able to communicate with each other to do all these things, and so much more. Signalling helps our bodies to respond and adapt to our environment. When cell signalling pathways work well, our body runs smoothly and signalling pathways are essential to maintain and promote health.

Dysfunction of one or more signalling pathways can result in pathological conditions starting from abnormal proliferation of cells to death of the organism.

Deciphering the molecular basis of cell signalling is a challenge of prime importance, and it will provide more insight into fundamental biological processes, such as cell growth, movement, and division. It also opens the door for potential new therapeutic approaches.

In Len Stephens and Phill Hawkins's lab at the Babraham Institute, we are dedicated to dissecting just one signalling pathway called PI3K signalling pathway. PI3K is a very well studied protein whose main function is adding a phosphate group to another molecule, in a process called phosphorylation, to another the molecule called PIP2 (this time, it's a lipid, not a protein). This type of molecule which aids the phosphorylation process are called kinases. Once PIP2 receives an extra phosphate group, we call it PIP3. It then starts a cascade of events that can lead to multiple processes such as cell growth or proliferation. As we know by now, these actions must be tightly controlled within an organism to prevent occurring diseases, such as cancer. PTEN is the next player, whose role is to directly antagonize the function of PI3K, which means removing the phospho- group from PIP3, therefore generating PIP2 and preventing or minimizing PI3K-dependent events. Proteins, which remove phospho- groups from other molecules, are called phosphatases. 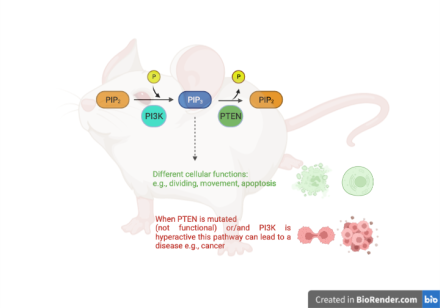 Unfortunately, in many diseases such as prostate cancer, PTEN function can be compromised due to genetic mutations, which can result in uncontrolled phosphorylation of PIP2 (and generation of PIP3) and amplification of cascade of events leading to increased cell proliferation and lead to tumour development.

In the Stephens/Hawkins lab, a dedicated team of scientists developed a number of special, genetically modified mouse strains that allow a very precise pull-down of PI3K from the tissue and then compare PI3K protein interactors between healthy mice and mice suffering from cancer. This powerful mouse model gives us a tremendous advantage in deciphering PI3K interactors in prostate cancer (and potentially other diseases), which can result in new therapeutic targets for cancer and/or other conditions.

If you are interested in PI3K signalling and the Stephens and Hawkins lab's research, check our recent animation: