Great science depends on teamwork, yet genuine partnerships are rare, especially those which sustain success over decades. Dr Len Stephens and Dr Phill Hawkins, both group leaders in the Institute’s Signalling programme, have worked together for more than 30 years. Here, they reflect on their research, their relationship – and their distinctly different approaches to fishing.

In 1980, Fred Sanger and Walter Gilbert won the Nobel Prize in chemistry for work on nucleic acid sequences; Polish workers set up the trade union Solidarity; and the Rubik’s Cube made its debut. It’s also the year that Phill Hawkins and Len Stephens met for the first time, with Phill a PhD student and Len a final year undergraduate at Birmingham University. 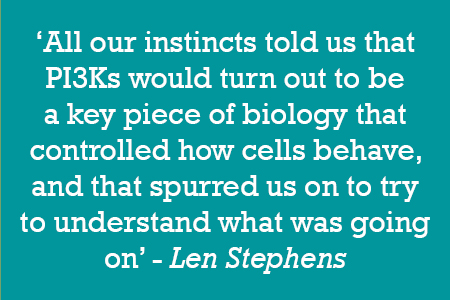 Hawkins remembers their meeting clearly. “I was working late in the lab and Len came by looking for my supervisor, Bob Michell,” he recalls. “When I told him it was late, and Bob had gone home, Len asked if he could come in and watch me do an experiment. We chatted, found out we both fished, and Len invited me to go fishing with him in Cannon Hill Park.”

After both worked as postdocs at SmithKline Beckman (now GSK) their paths diverged briefly, but in 1990 when an opportunity arose for Hawkins to join Stephens in Robin Irvine’s lab at the Institute of Animal Physiology at Babraham, they jumped at the chance.

Irvine’s lab focused on cell signalling pathways involving a sugar-like molecule called inositol. Lew Cantley’s lab in Boston had just discovered a new enzyme called phosphoinositide 3OH-kinase, or PI3K for short, that made a new family of inositol-containing molecules in cells in response to growth factors. There was much to discover and while the science was challenging, there was a sense in the lab that they were hunting down something significant.

“At the beginning it was about correctly identifying the molecules that were appearing in cells and working out how they were made,” Stephens explains. “Our instincts told us they’d turn out to be a key piece of biology that controlled how cells behave, and that spurred us on to try and understand what was going on.”

We now know that cells monitor and respond to their environment by controlling the activity of a few key proteins, which in turn regulate a cascade of downstream events. Together, they orchestrate the complex behaviour that happens in cells, from cell growth and division to cell survival and movement. When these signalling networks go wrong, they can lead to a range of diseases, including cancers, chronic inflammation and immunodeficiencies, so understanding the basic biology has opened up new treatments for these diseases.

“We thought our research would be a fundamental bit of cell biology, but at the time we didn’t know where it would lead,” says Hawkins. “There wasn’t a single eureka moment, many small step changes along the way allowed us to piece together the basics of what was going on. Then other labs discovered that mutations in PI3Ks are often associated with cancer. That’s when it became a much wider impact story, and attracted the attention of other researchers and pharmaceutical companies.” 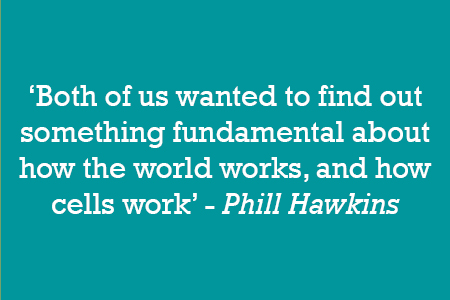 Since then, Stephens and Hawkins have worked closely with industry, collaborating with Onyx Pharmaceuticals, UCB, AstraZeneca, GSK and Pfizer. By 2013, the pharmaceutical industry had invested £350 million in PI3K research and had more than 20 drugs targeting PI3Ks in clinical trials. In 2014 the first – Idelalisib – was licensed for treating chronic lymphocytic leukaemia.

Reflecting on their partnership, both agree that a natural friendship, shared values, and contrasting – but complementary – personalities have underpinned its longevity and success. Hawkins is more emotional, he says, his moods tracking the highs and lows in the lab, whereas Stephens is steadier and a battler, with a bold ambition for their science.

According to Stephens, having similar values is key. “The rest flows from there,” he says. “Are we similar in all respects? No, and that’s important. We have different strengths and weaknesses. It’s about your motives, the things that inspire you, the things you respect in others, what you find joy in. And sometimes it’s about understanding – at a deep level – what can hack someone off.”

Both are eminent scientists and fellows of the Royal Society, but say that what matters most is a shared scientific curiosity, and a happy working environment. “Neither of us wanted success for its own sake or accolades,” says Hawkins. “We wanted to find out something fundamental about how the world works, and how cells work.”

And then there’s the fishing, which seems to encapsulate what they share, as well as their differences. Like their research and friendship, their fishing goes back to Birmingham. “When he invited me to Canon Hill Park, I saw fishing in a totally new light,” laughs Hawkins. “It’s a science for Len: what type of line to use, which home-made floats – he even made catapults with different types of elastic to deliver a certain number of maggots to a precise spot in the water! It’s fishing on a whole other level.”

Stephens agrees. “As far as I’m concerned it’s incredibly similar to doing experiments. I love trying to figure out what the fish are doing under the water, and doing experiments to work out how to catch them,” he concludes. “So yes, I can get very intense about going fishing.” 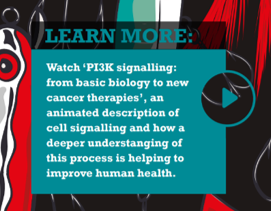