Fundamental research is vital for science and society. Many medical and technological revolutions are rooted in basic research, yet those roots can be hard to trace. Today, spinouts are key to turning academic bioscience into healthcare treatments. Dr Stefan Schoenfelder, a group leader in the Institute’s Epigenetics programme and co-founder of Enhanc3D Genomics, discusses taking a tool developed for fundamental research and building a business around it.

Setting up a new biotech spinout is a demanding business, full of funding rounds, legal structures and recruitment decisions. Doing so at the start of a global pandemic, however, adds a new set of challenges. Founded in January 2020, Enhanc3D Genomics secured its first round of funding the following month and by March 2021 had closed a second round of funding worth £1.5 million.

Being involved in a biotech spinout is somewhat surprising for Schoenfelder, who has worked at the Institute for 15 years, because it was never part of his career plan. “If you’d asked me five years ago, I’d have said that I wanted to focus solely on academic research,” he explains. “I’ve always hoped my research would help patients, but never saw myself as part of the commercial world. Now, I believe that I can play a more active role in making that transition from basic science to clinical application.” 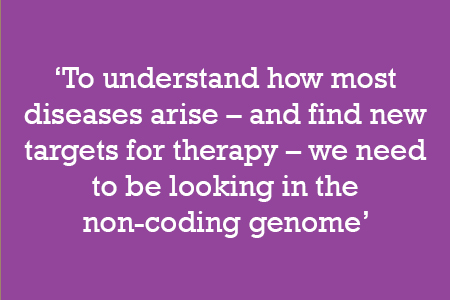 The first fully sequenced human genome was published in 2003, with hope that this ‘operator’s manual’ for the human body would revolutionise our ability to treat, prevent and cure disease.

During the past two decades, however, research has revealed that our DNA contains intricacy and complexity unimagined in 2003. Together with our genes, the noncoding sequences of DNA between the genes – once dismissed as ‘junk DNA’ – are just as important. And as well as its linear sequence, the 3D structure of DNA as it is folded within the nuclei of our cells is crucial, because it brings genes into close proximity to their regulatory elements – a key step in gene expression control.

According to Schoenfelder: “These regulatory elements function like molecular switches to control which genes are active, and thus produce proteins, in which cells. This process of gene expression control is vital to allow cells – which all contain the same genes – to specialise to carry out different tasks, and to help them respond to changes.” Identifying which regulatory elements act on which genes has been an epic challenge in genome biology, but thanks to an ingenious modification to the Hi-C technique called Promoter Capture Hi-C, developed by Schoenfelder and his colleagues at the Institute, this can now be done for all human genes in a single experiment.

Crucially, studies deciphering the 3D folding of the genome at high resolution also reveal how small mistakes in regulatory elements interfere with normal control of genes, leading to a greater chance of developing specific diseases.

The best example of how Promoter Capture Hi-C is helping researchers understand the genetic basis of important human diseases comes from so-called Genome Wide Association Studies (GWAS): hugely powerful studies sequencing the whole genome of people with and without particular diseases to spot the differences involved in causing the disease. By applying Promoter Capture Hi-C, research by the Institute linked the tiny changes in non-coding DNA to target candidate genes implicated in rheumatoid arthritis, type 1 diabetes and Crohn’s disease.

“The vast majority of genetic variants associated with disease are located in non-coding parts of our genome,” says Schoenfelder. “That means if we want to understand how most diseases arise – and find new targets for therapy – we need to be looking in the non-coding genome.”

The company’s vision is ambitious. “Our vision is to create 3D genome maps of all the cell types in the human body. If we succeed, it will be a unique database that will allow us to establish causal links between disease-associated regions and disease genes in almost every disease. Then, we will partner with experts in different disease areas to find new therapeutic targets,” Schoenfelder says.

Reflecting on a momentous year, he is enthusiastic about the spinout process and Enhanc3D Genomic’s potential: “The prospect of creating a legacy that uses fundamental research to create a business and help patients is hugely exciting.”

“Covid-19 has shown the world what small, agile biotech firms can achieve. The most amazing research stories have come out of companies like Moderna and BioNTech,” he concludes. “I hope more people now see there’s lots of interesting research going on in biotech. The Institute and the many companies on the Campus create the ideal environment to foster these interactions. We need to get out of our ivory towers a bit more!” 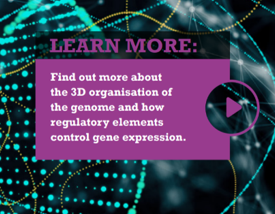