How I got into my career in animal welfare

How I got into my career in animal welfare

It was just over five years ago that I joined the Babraham Institute as part of the animal facility team, but my career in animal welfare started some five years before that and even earlier than that, I developed a love for animals.

At sixteen, I wanted to be a veterinarian and duly did my work experience at a local practice along with another girl from my school. There were two consulting rooms and my luckier counterpart got all the cute puppies and kittens and I seemed to land the accidents and grizzly stuff. Those that know me are aware of my squeamish nature; an inability to deal with blood and gore (without passing out), so I quickly realised it wasn’t my vocation after all. Plus, despite a high regard for science and a love of biology, I have a much wordier brain than a science orientated one.

I suppose after that I lost my way a bit, only to find the right path later on, success is a journey after all. I wanted to join the Army, mainly because I am a huge fan of physical exertion, extreme sports and regimented structure. I was keen to do dog handling but the careers bods thought that my grades warranted something toothier (they said I’d end up cleaning kennels all day – NB for later!); so they tried to push me down the Ammunition Technician route. Hello! That’s bomb disposal! I’m not the most laid back of individuals and it didn’t appeal. So, I did my Army selection. I beat all the other girls in the timed run and excelled at all their physical tests. They offered me a job but I didn’t go. Given that my main motivation was the opportunity to become an awesome skier and represent my country playing hockey and that being in a war zone wasn’t top of my list, perhaps it was for the best.

I did my A levels, went to university (two different ones) and ultimately dropped out after 3 years, I had no degree and mounting student debt. It wasn’t for me and it took me a while to realise it but when I made the decision to leave, it was a huge relief. To plaster the wound I upped sticks and went to Manchester and attended the School of Sound Recording; I fancied becoming the next superstar DJ. Alas, it never happened but I had a great time along the way. I started temping in Manchester and fell into an admin career that spanned many areas including team support, office management, communications, marketing and PR. I then worked for, a now abolished, Government Quango in Cambridge and was subsequently made redundant. Instead of being sensible and saving the money for a house deposit, I spent it all on a round the world trip. During which time I took in a lot of animals; visited animal parks, zoos, sanctuaries, everglades and more. It was then that a period of contemplation set in and because I loved it so much, I revisited the idea of working with animals. 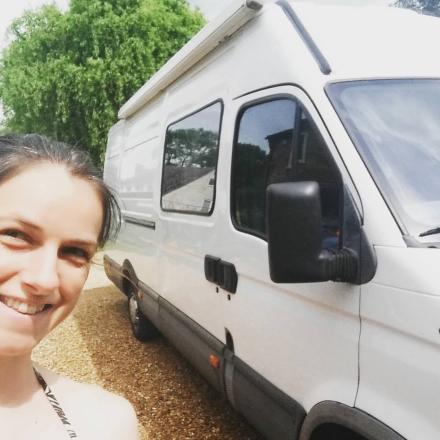 When I returned from my travels I sought quick employment and then planned my next career move, working with dogs. I applied for an Animal Rehomer job at a local animal rescue centre and got knocked back, I applied again, and got knocked back a second time. On the third try I was able to secure an alternate weekend job in the dog section. For a time I did this while working full time at another job; but it was a foot in the door. Eventually I was able to go full time and it turned out to be my dream job – getting paid to exercise, assess and mix dogs as well as responsibility for all their general care and of course cleaning kennels! During my time there I learnt a huge amount about behaviour, welfare and health but it didn’t result in any recognised qualifications. I progressed to become a team leader but it wasn’t a job one does for the money and so I had to adapt my life to be able to survive and more importantly to be able to afford a ski holiday! Full-time van life ensued; I sold everything I owned, except what fitted into my Iveco Daily extra-long wheelbase panel van. Her name was Vanda Panda (she was white with black doors) the Wonder Van.

On the back of this dog job, I inadvertently begun a dog and housesitting business, which I still do today. People that work with dogs, tend to have their own dogs, while being incredibly fussy about who might look after them when necessary. Who better than a dog handler needing an interim house to stay in with Wi-Fi, washing machine and a hot shower?! Some of the dogs I look after now are the rescue centre dogs I rehomed to people; I have had the privilege of looking after them in kennels, through to seeing them thriving in wonderful homes.

I made the move to the Institute to remain in animal welfare, pursue formally recognised training and qualifications and to progress in my career, opportunities that Babraham promised and delivered. I had previously gained so much knowledge and experience working with dogs but did not have the qualifications to back it up. I started as a Trainee Animal Technician, quickly gaining my Institute of Animal Technology (IAT) Level 2 Diploma in Laboratory Animal Science and Technology and worked my way up to be an Experienced Animal Technician, and then a Supervisor, in the Biological Support Unit. Most recently I have completed my IAT Level 3 . It has always been my intention to continue this further, as much as I can. 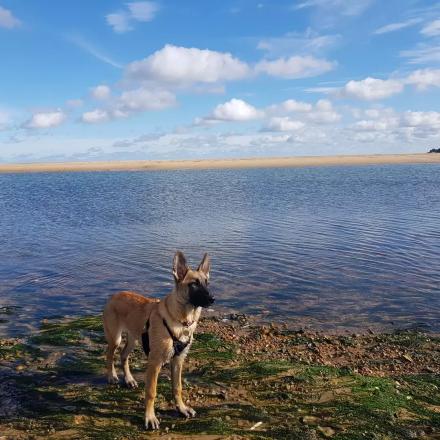 These days I live in a house and have my own dog (my lifetime’s wish!), Roux is a 9-month-old Belgian Malinois x German Shepherd. When she is old enough she will run with me and I anticipate my 5k PB time will be at least 2 minutes quicker! One day soon I would like to get another campervan, if there is one that will live up to the legend that is Vanda.

Making the change from my comparatively comfortable lifestyle to go and walk dogs in all weathers, for not much money was quite a big and nerve-racking decision, but it paid off. Although initially there was not necessarily a clear pathway, the Institute provided that for me with training and progression. I would have never have got here though without the persistence needed to gain a position working with animals in the first place; the competition is often fierce. My only advice for those interested in such a career is to dust yourself off and try again, if at first you are not successful. Also, consider volunteering or weekend work, it’s a great way to get started!

Find out more about our Biological Support Unit

Animal welfare and care at the Institute

Explore more of our career blogs