How yeast is reshaping ideas on ageing

How yeast is reshaping ideas on ageing

Healthy ageing is one of society’s most pressing concerns, but basic questions like why we age remain a mystery. Dr Jon Houseley, a group leader in the Institute’s Epigenetics programme, studies the ways in which yeast cells adapt to new environments. As well as uncovering new connections between adaptation and ageing, his research is challenging our ideas about ageing itself.

Dr Jon Houseley is a heretic. Along with others in the field of ageing research, he is questioning long-established orthodoxies of ageing. For decades, ageing has been seen as inevitable, a paradigm that has so far failed to help us answer the most basic questions about the nature of ageing.

If you rewind to the 1920s, however, alternative theories of ageing existed. Rather than simply a slow, inexorable process akin to a once pristine car rusting and breaking down, some argued that ageing had evolved for some purpose. In the absence of evidence, they lost the argument. Today, Houseley and others think they may have been right. 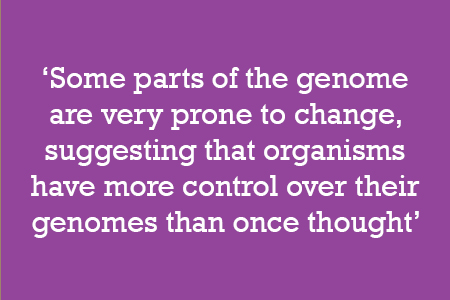 “I’ve been in the field long enough to say that you should be wary of any theories about ageing – including mine,” says Houseley. “The problem is that 60 years on, it’s really hard to know what this conserved underlying mechanism that’s breaking down in ageing actually is. We need fresh ideas, even if they are heretical.”

Ageing is hard to study. So much happens in a slow and concerted way in myriad systems that coming up with cause and effect is mindbogglingly hard. Many genes and processes are involved, all of which are interconnected, so identifying the underlying ‘thing’ has so far proved impossible. It’s even possible that ageing is not, in fact, one single thing.

“Ageing is really difficult to get your hands on, which is why we’ve started to revisit these old debates. But rather than argue about it intellectually, we have rolled up our sleeves and done experiments with yeast,” Houseley explains. “Using yeast, we are asking whether there are situations in which being old is an advantage – and it turns out that there are.”

One of Houseley’s central aims is understanding how organisms adapt to challenging – and changing – environments. “It sounds like a weird fit with our focus on ageing,” he admits. “But a major angle we have on ageing is that it could be a process that exists in basic eukaryotes like yeast to help them cope with stress.”

His studies provide persuasive evidence to support this idea. One focused on CUP1, a gene in yeast that allows cells to survive in high-copper environments. Some yeast cells make extra copies of the CUP1 gene, allowing them to survive and outcompete cells with fewer copies of the gene.

Surprisingly, the study revealed that extra copies of CUP1 result from an active process rather than random mutations. “We think of genomes as long-term, stable repositories of information but they change – and not only over evolutionary timescales,” says Houseley. “We know genome changes are hallmarks of cancer, but we’re discovering them in healthy cells too. Some parts of the genome are very prone to change, suggesting that organisms have more control over their genomes than once thought.”

But this raises a problem: cancer aside, organisms care about the genomes they pass on to future generations and are careful to minimise mutation rates in their genes. This is where ageing can be useful, because genome changes can be restricted to old cells that only reproduce rarely, and to the strange non-chromosomal DNA elements that accumulate in old cells.

The Houseley lab examined how yeast forms circular non-chromosomal DNA elements in response to copper and how this differs between young and old yeast cells. The results revealed that older yeast cells hoard circular DNA containing extra copies of genes like CUP1. “It’s like a selfish insurance policy,” he says. “But while these extra genes might provide an evolutionary advantage, they might also come at the cost of ageing because these extra bits of DNA could hamper normal essential cell pathways.”

Understanding more about DNA circles, and how cells can change particular parts of their genomes in response to particular environments has important implications for both cancer and ageing. Cancers use DNA circles to carry cancer-causing oncogenes and to adapt in the face of chemotherapy, enabling them to develop resistance to anti-cancer drugs.

Houseley is at pains to stress that evidence for ageing being adaptive in yeast does not mean it’s also adaptive in higher eukaryotes. It does, however, explain how it evolved and may explain why ageing still occur in higher organisms despite bringing no benefit.

As well as setting us on a new path to better understanding ageing, his research is also relevant to efforts to stop cancers from becoming drug resistant and could pave the way to healthier ageing. “Ageing is the biggest risk factor in a vast number of human disorders, but to come up with ways of dealing with ageing, we first need to understand it,” he concludes. “At the moment, we don’t understand how ageing works in any organism, so knowing how it works in one – even yeast – would be a major advance.”