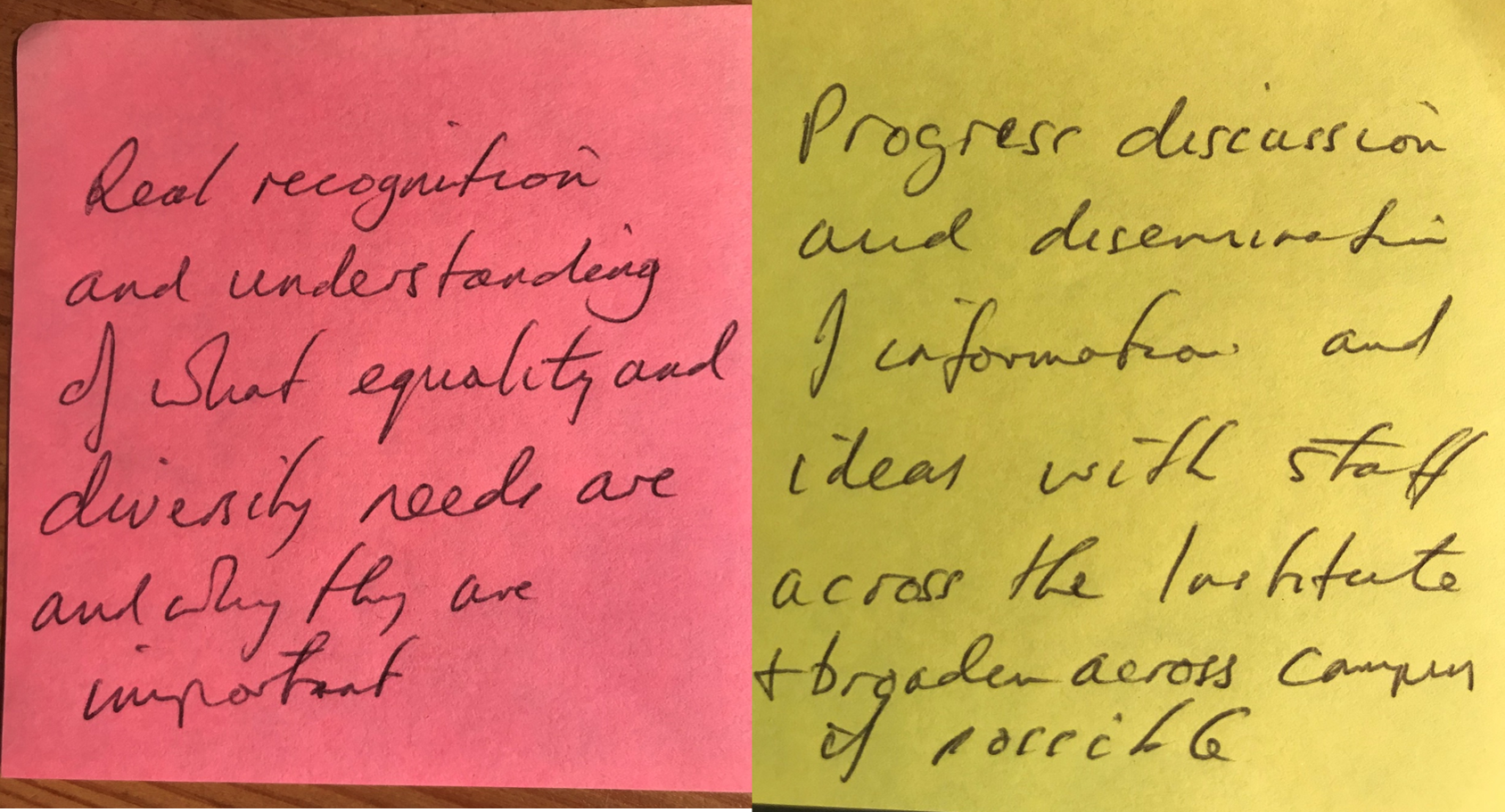 A tribute to Michael Wakelam

These two sticky notes were written by Michael during an equality4success brainstorming session. In response to the prompt, 'What members of the e4s committee would like to achieve by 2021', the pink one reads, 'Real recognition and understanding of what equality and diversity needs are and why they are important.' In response to the prompt, 'Actions to achieve the above', the yellow one reads, 'Progress discussion and dissemination of information and ideas with staff across the Institute + broader across campus if possible.' Used with permission from his family.

In summer 2013, the Babraham Institute recognized the importance of the excellent work being driven by the Athena SWAN Charter to support women in science, and made the decision to participate in this initiative. Michael asked me to convene and chair the Athena SWAN Self Assessment Team but neither of us envisaged just how transformative this step would be in multiple ways for Babraham culture and science.

A fantastic team of volunteers assembled and what followed was widespread consultation among staff, the shining of a very bright spotlight on every aspect of Babraham policy and practice, and identification of key issues that needed to be addressed. Michael’s role in this was a classic example of his unique blend of leadership and humility. He freely admitted that he didn’t really understand why, for instance, there were so few senior female group leaders at Babraham and elsewhere, what the issues were or how he or the Institute could help, but he was very keen to do so. His modus operandi, in his own words, was, “Just tell me what would make a difference and if we can afford it, we’ll make it happen.” 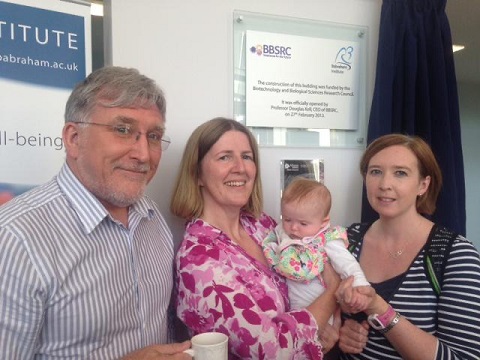 One of my favourite memories was when I told Michael that in a recent re-organisation of Babraham employment contracts, fully paid maternity leave had been reduced from 6 months to 4 months, resulting in members of staff being concurrently on different maternity leave conditions. He was horrified that this had happened, embarrassed that no one had noticed, and reversed the anomaly the same day, extending fully paid maternity leave for those already on reduced leave. In the same way, core working hours and flexible working were swiftly and easily embedded into Babraham culture, along with not scheduling committee meetings in school holidays. Michael was thrilled when we achieved our first (and second) Silver Athena SWAN award, and was determined to play his part to maintain and improve on the initiatives that had achieved this.

Michael understood the challenges of balancing careers and family life, and was immensely proud of his wife Jane’s successful career in social work, while acknowledging that she had done more of the balancing than him. While he loved science, it was clear that it came second to his family. He was unusual as a Director in being so open about this: he was always talking about his sons, Patrick and Alex. I took this trait of Michael’s for granted because it was so natural. With hindsight, it was a very important part of his contribution to the success of our Athena SWAN programme. It enabled others, particularly women, to acknowledge openly that they had other important aspects of their lives apart from science that they needed to take care of and balance with their work.

You never know when that sense of loss is going to strike – it might be seeing lipstick on a glass or the sound of a brass band. Not having Michael send me a recent article about how inequalities are being exacerbated during the pandemic was one of those moments. Even with the craziness of being the Institute Director, he found the time to regularly send me articles on the challenges and impacts of inequality – it was important to him.

I think this has been the single most important aspect to addressing inequalities at the Institute: honest recognition of issues by our Director and the backing to drive change. Indeed, when our European gender equality project LIBRA ran workshops to inspire and support other organisations to kick start their equality planning, we held ‘goldfish bowl’ sessions where myself and Henri van Luenen from the NKI in Amsterdam, role-played senior management who were dismissive of the need for equality, to highlight the critical nature of support on these issues from the very top. Michael provided that support at Babraham. He was passionate about science and genuinely recognised that the only way to do great science was to have great people working throughout the organisation. This often meant embracing new ways of working; job-sharing researchers, remote working and a roving researcher scheme have all meant that those people who might previously have been excluded from the workplace could contribute to making Babraham a great organisation – for its staff and for its science.

Michael was rightly proud of the work carried out in all corners of the Institute to make it a more inclusive environment – under his leadership equality work transitioned from being ‘the Athena SWAN project’ to being embedded and operationalised so that our practices and processes can avoid biases that lead to the exclusion of great scientists from doing great science. His support for equality and inclusion will undoubtedly continue to ripple through to the future generation of scientists at Babraham and beyond.