Welcome to the lipidome

Welcome to the lipidome

Once neglected as too dull to study and too sticky to work with, lipids are at last stepping out of the shadows. Institute Director Michael Wakelam and lipidomics facility manager Andrea Lopez-Clavijo explain the challenges of working with these cellular Cinderellas and share their excitement of research in a field that’s finally giving up its secrets. 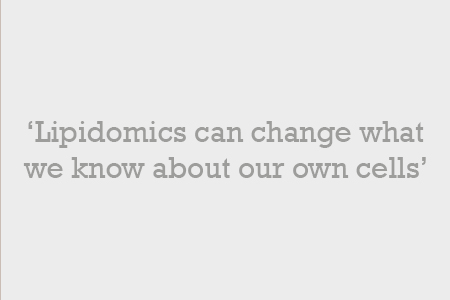 For Professor Michael Wakelam, there’s never been a better time to be studying lipids. On becoming the Institute’s Director in 2007, he joined a thriving lipid research community. Things were very different, however, at the beginning of his career. “When I got my first lectureship in 1985 I worried that all the good stuff had been discovered,” he remembers. “Now, I wonder how I can cram it all in before I retire. I wish I was just starting out again, because the things we can do are awesome.”

Lipids are essential components of all our cells, but were for many years neglected by many scientists because they were difficult to study and seen as less exciting than genes or proteins. “They aren’t easy to work with,” Wakelam says. “They’re not water soluble and some lipids stick to plastic. It can be painstaking work and until recently they were incredibly difficult to analyse and quantify.”

Today, all that has changed. The Institute has played a central role in lipid research since the 1950s, but it’s been the development of bioinformatics and mass spectrometry over the past 20 years, together with the decision in 2016 that the Institute would co-host LIPID-MAPS, the world’s largest lipid database, which has opened up the field and fueled Wakelam’s excitement.

We now know that as well as making up membranes and storing energy, lipids play a vital role in cellular signalling pathways. “They don’t just hold things together and store energy. They’re actually incredibly dynamic and regulate almost every function of the cell,” he says. We have also discovered that the lipidome – which describes the total lipid landscape of our cells – is astonishingly complex and diverse. Thanks to new mass spectrometry techniques, many of which were pioneered at the Institute, some 20,000 different lipid species from 30 distinct classes have so far been identified.

Structurally, lipids are proving fascinating too. Small differences in lipid structure and saturation have major impacts on cell membranes: whether they are thick or thin, straight or curved, rigid or flexible all depend on membranes’ lipid makeup, with far-reaching implications for how immune cells work, how cancers spread and how viruses are able to infect our cells. 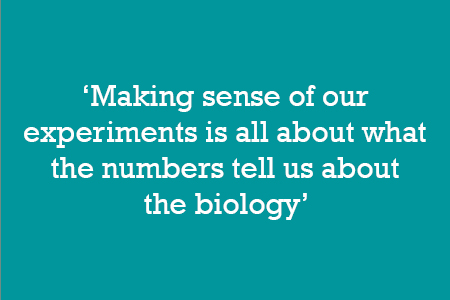 Lipidomics has exploded thanks to advances in mass spectrometry. “It’s allowed us to recognise an astonishing structural diversity in lipid molecules,” says senior research fellow and expert analytical chemist Dr Andrea Lopez-Clavijo. “Without mass spectrometry, we wouldn’t have been able to determine what lipids were there and in what quantities. And without the bioinformatics capability to understand this data, all this would be pointless.”

But gaining a clearer view of the lipidome is only the beginning, Lopez-Clavijo explains: “Lipidomics is about finding connections between the data and its biological relevance. Making sense of our experiments is all about what the numbers tell us about the biology.”

Now that we can start asking more interesting questions, the data is revealing some remarkable things. In 2018 Institute researchers published an important paper using lipidomics to unpick the common cold. The cold virus hijacks the cellular machinery in order to replicate and release virus, so membranes must be modified for this to occur; the implications, however, had been largely ignored. “How does catching a cold affect our lipid molecules during the first few hours of infection? It surprised me that no-one had asked this question,” says Wakelam.

By culturing human bronchial epithelial cells, infecting them with the cold virus and then using mass spectrometry and bioinformatics to examine changes in hundreds of lipids over the course of seven hours, they found that the infection caused changes in almost 500 lipids, a discovery that has allowed the team to identify pathways that could be new anti-viral drug targets.

More importantly, it shows that lipidomics has the potential to uncover new treatments for other previously hard to treat diseases from cancer to hepatitis. Recent studies with colleagues at Oxford, for example, revealed that the unsaturation of lipids affects the ability of hepatitis C virus to infect liver cells.

“Modifying the membranes modifies the viruses’ ability to get into cells. Everywhere we look we find this – it’s a completely understudied area,” Wakelam concludes. “There are many more discoveries to be made with the help of lipidomics – and it has huge potential to change what we know about our own cells.” For a former cellular Cinderella, the future for lipid research looks bright.

This feature was written by Becky Allen for the Annual Research Report 2018.