The Gender Pay Gap is a measure of the percentage difference between men’s and women’s average earnings (expressed as an hourly rate) across the organisation from the most senior to the most junior pay.

The Babraham Institute is world-renowned for life sciences research into the fundamental biology underpinning development, health and ageing. The Institute holds charitable status and is committed to promoting and developing a culture of equality, diversity, inclusivity and mutual respect that supports our ambitions and attracts highly motivated and talented people from around the world.

The Institute continues to work to support equality, diversity and inclusivity (EDI) at the Institute and also as part of the Babraham Research Campus. The Institute’s equality4success action plan for 2018-2022 sets out how the Institute works to provide equal opportunities for all staff irrespective of gender, ethnicity, belief or sexual orientation in order to deliver excellent science. Objectives defined within this action plan reflect the Institute’s commitment to working towards reducing the gender pay gap by regular analysis of pay and promotion rates, and benchmarking. The Institute continues to explore new ways to embed EDI into all areas of the scientific ecosystem, including working with others to make faster, more effective progress.

Reporting our gender pay gap annually in line with current UK legislation allows us to track our progress in building a fair and diverse community that recognises and respects everyone. 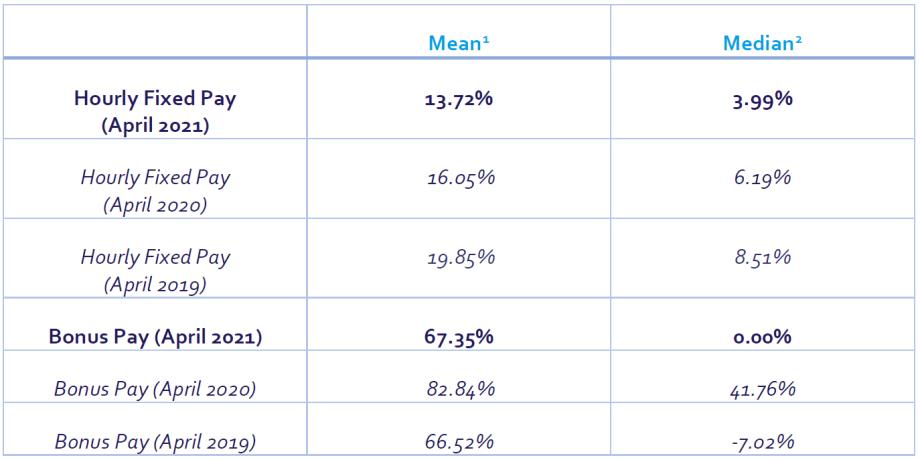 [1] Mean: the percentage difference in average pay between male and female employees

[2] Median: the percentage difference in the middle value pay between male and female employees

The above table shows the Babraham Institute’s overall mean and median gender pay gap (based on hourly rates of pay for all employees) at the snapshot date (5th April 2021) and additional 2020 and 2019 data for comparison of progress made. Archived reports are available for 2020, 2017/2018 and 2016/2017. Due to the coronavirus pandemic, the requirement for reporting gender pay gap information on the 2019 snapshot date was waived but we included our 2019 data for the continuity of the data records.

In comparison with data from 2020 and 2019, the 2021 figures show that the Institute’s gender pay gap has continued to reduce, reflecting the promotion of women from the third to fourth quartile, resulting in an increase in the percentage of women in the highest paid quartile.

The table also captures the mean and median difference in bonuses paid to men and women in the year ending 5th April 2021. The bonus pay calculation represents the gender gap in performance related pay over and above standard pay increases plus bonuses paid to executive level staff.

The Gender Pay Gap in relation to bonus data decreased between the 2021 and 2020 reporting periods. The data continues to be affected by how bonuses are awarded at the Institute. Typically, performance related pay for staff below the top grades is consolidated into their basic pay whereas executive level staff receive non-consolidated performance bonuses. The 2021 mean bonus pay remains our greatest pay gap and is due to staff employed in the highest pay bands being male and receiving bonuses rather than consolidated pay awards. However, the gender analysis across the pay quartiles shows that the representation of women in the top quartile is increasing. 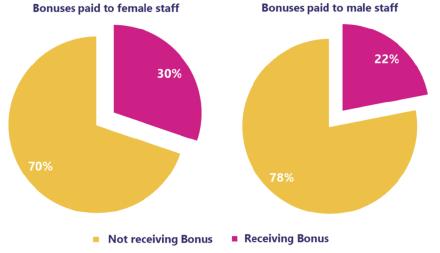 The data below identifies the Babraham Institute’s gender distribution across the four equal quartiles. At the snap-shot date of 5th April 2021 the gender split across Babraham Institute staff was 53% females compared to 47% males.

We note that the fourth (highest paid) quartile has achieved a 50:50 balance, reflecting a progression towards increasing female representation amongst our most senior staff, although not in the top two bands represented within this quartile so we recognise that there is still work to be done. Looking at the gender distribution across all four quartiles, the 2021 data shows an improved gender balance across the second to fourth quartiles. We acknowledge that the largest gender imbalance continues to be seen in the lowest paid quartile. Whilst the improved gender balance in the highest paid quartile is encouraging, the Board of Trustees and Institute senior leadership remain committed to continuing a programme of change, as is referenced in the below section ‘How we are taking action’.

What we can identify from the data

The Institute remains confident that men and women are paid equally for equivalent level roles across the organisation. There has been a move towards improved male and female representation across the first, second and fourth quartiles. Promotion of women to more senior roles through the reporting period has improved the representation of women at these levels and this is something that the Institute continues to work towards.

How we are taking action

While the Institute is pleased to see progress made towards reducing its gender pay gap, it remains committed to making further headway. Our Board of Trustees has demonstrated commitment to this challenge by setting a target of 30% of staff at Band 3 and above being female by 2022. The Institute also aims to achieve a gender pay gap of less than 10% by 2022 (mean gender pay gap representing no more than 10% difference in average pay between male and female employees).

These objectives are part of the Institute’s wider commitment to support all employees to achieve their maximum potential, and to remove any barriers to this where possible. Our equality4success programme spearheads our equality, diversity and inclusion projects in order to meet this commitment but the wider Institute actively works as a community to highlight and address areas that represent inequality, impede progress and affect performance. To give specific examples, initiatives have led to an increase in women applying for and being successful in obtaining promotions, online and local provision of leadership courses has eliminated the requirement for participants needing to arrange time away from home, and equality, diversity and inclusion are incorporated in our recruitment practices through unconscious bias training for interview and selection panels and the inclusion of personal commitments to equality, diversity and inclusion in all role specifications.

Specifically, in the reporting period, the Institute reviewed and relaunched the personal promotion process, which for researchers observes the DORA principles for responsible and fair assessment of research contributions and outputs.