The immunoglobulin heavy chain (Igh) and immunoglobulin kappa light chain (Igk) loci are the largest loci in the genome and must move in 3D nuclear space to juxtapose and recombine distal V , D and J genes.

They use a complex set of epigenetic mechanisms including histone modifications, DNA looping and non-coding RNA transcription, and are the ultimate paradigm of nuclear organization.

We are particularly interested in the roles of non-coding RNA transcription and nuclear dynamics in V(D)J recombination of the Ig loci. Over 90% of transcribed sequences in the genome are non-coding, ie do not produce protein. Further, 20% of RNAs come from the non-coding strand (antisense transcripts).

A key unanswered question in gene regulation is: what is function of non-coding transcription and the resulting transcripts? They have been proposed to regulate activation of large chromatin domains differentially expressed in different cell lineages, or bring distal promoters and enhancers together.

Our work suggests that this transcription process opens up the chromatin into a poised state to facilitate further chromatin reorganization and recombination of first the D and J genes, followed by the V genes at the appropriate developmental stage.

We have also found that the 100kb region between the V and D domains (V-D intergenic region) contains powerful insulators that control the sequential opening up of the Igh locus.

We have also found that the Igh intronic enhancer, Eu, is transcribed at high frequency and resides almost continuously at a transcription factory, a metastable subnuclear focus of RNA Polymerase II, to which genes are recruited for transcription.

We propose that stable positioning of Eu at a transcription factory provides a focal point for recruitment of transcribing distal V domains to share this transcription factory, thereby providing the driver for the extensive DNA looping of the V region that facilitates the 3D nuclear proximity required for V to DJ recombination. We are currently ablating non-coding transcription in the Igh locus in vivo to functionally test this model. 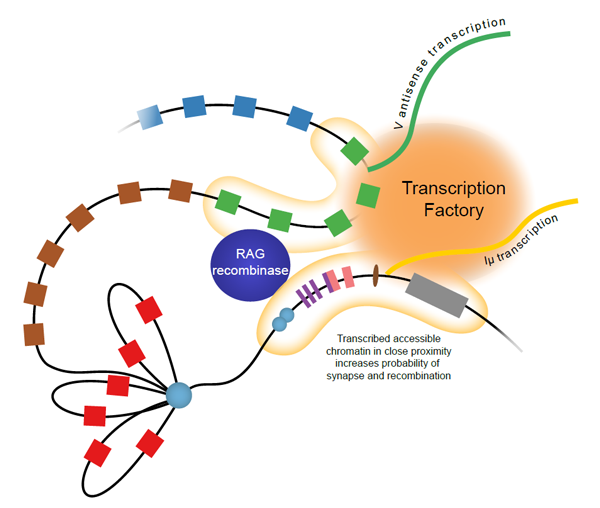 Model of transcription and 3D nuclear organisation of the recombining Igh locus. Schematic representation of the 3’ region of the Igh locus from the constant genes (grey box) to the 3’ VH J558 genes (blue boxes). An Eu-independent rosette encompassing proximal VH genes (red boxes) is associated with CTCF (light blue circle). Antisense transcription across VH genes, (green boxes), brings them into the same transcription factory as Iu transcription from the Eu intronic enhancer (brown oval). This brings distal VH genes into sufficiently close proximity to the DH–JH junction (purple and pink boxes) to allow synapsis and recombination by the RAG complex (from Stubbington and Corcoran 2013).