Ageing is probably the biggest challenge to healthcare systems in the first world, and the focus of major scientific initiatives. Ageing is normally viewed as a slow, inevitable decline in fitness, but the reality is more complex. It remains unclear why closely related organisms age at different rates, and why diet and lifestyle have such potent effects on longevity. The identification of mutations which extend healthy lifespan in a variety of organisms shows that there is a strong genetic component to ageing, but the interplay between genetic and environmental factors which appears to govern ageing remains mysterious.

Yeast is a widely used model system for ageing; this experimentally tractable model organism has an ageing process with remarkable similarities to higher eukaryotes. We are using yeast to define genetic and environmental contributions to ageing, and the transcriptional and phenotypic outcomes of these contributions. We are particularly interested in whether the decline in fitness associated with ageing can be prevented by changing diet or environment. 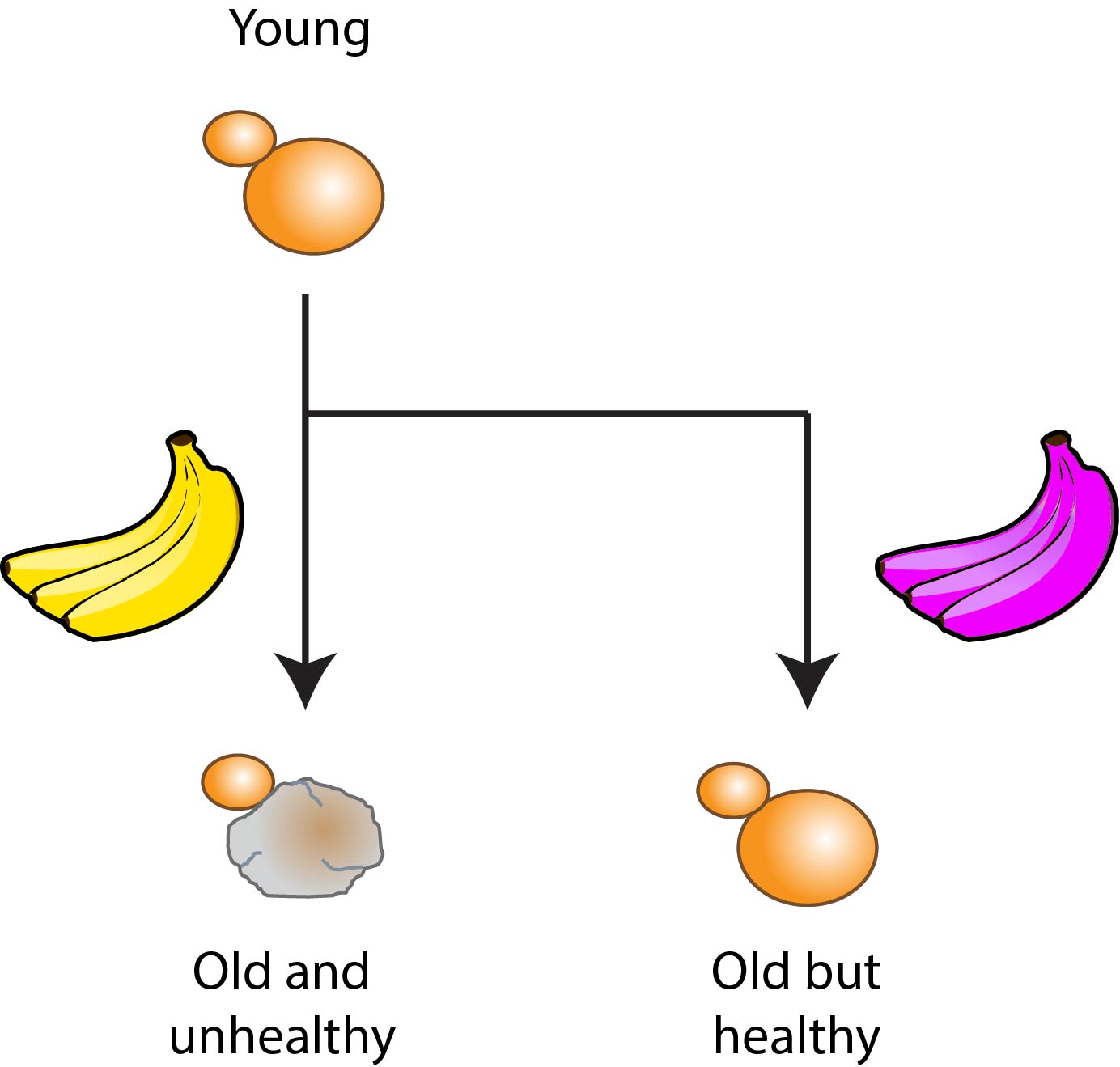 This picture portrays the ideal solution to the ageing problem - a simple change in diet allows ageing to occur without the associated health problems. But what is the purple banana? In yeast we have recently shown it to be a sugar called galactose. This is not, of course, true for humans, but the fact that we can change diet to allow healthy ageing in a simple organism shows that healthy ageing can occur, and may one day be a reality for us too.

Our first aim has been to define how ageing impacts our simple model organism. This seems obvious – ageing leads to a slow decline in fitness, right? However, fitness depends on your environment, and organisms tend to specialise for a particular growth strategy. Although ageing does reduce yeast fitness, this has always been studied in glucose – the food for which yeast is specialised.

Amazingly, we show in our recent Aging Cell paper that as cells age they grow faster in other carbon sources – in other words their fitness increases with age! This means that ageing was probably not always a uniformly negative process as it is now, and our ancient single-celled ancestors would have actively benefitted from aging when their environment was fluctuating and unpredictable.

This idea is encapsulated in our ACTIVE hypothesis of ageing (Ageing Cells Thrive In Variable Environments), which raises the idea that controlling ageing would have been useful in our evolutionary past, providing a driving force for the evolution of age-regulatory pathways that respond to the environment, pathways that we know are still active in mammals.

On the molecular level, we have refined existing methods to purify and characterise ageing cells and are constructing reference transcriptomes and epigenomes during ageing. Our preliminary data suggests that ageing even in simple unicellular eukaryotes is a far more complex process than currently believed, encompassing a mixture of regulated and unavoidable changes. Detangling this mixture of pathways is a critical aim, and understanding how the individual pathways can be modulated by diet and drugs is of particular interest.