To coincide with the retirement of Professor Robin Irvine FRS the Biochemical Society and FEBS are jointly hosting a scientific meeting to bring together eminent researchers, past colleagues of Robin’s and early career researchers. ‘Signalling 2015: Cellular Functions of Phosphoinositides and Inositol Phosphates’ is being held from 1–4 September 2015’ in Robinson College, Cambridge.

Robin worked at the Babraham Institute from 1975 to 1996 and laid the foundation for the study of phosphoinositides and their roles in cell signalling for which the Institute is now internationally renowned. Cell signalling and how cells communicate with each other is still a core component of the Institute’s life science research on lifelong health and healthy ageing. In particular, Robin was involved in one of the most important discoveries in intracellular signalling, the discovery of IP3 as the molecular messenger that releases intracellular calcium (see the video of Robin talking to his collaborator Professor Sir Michael Berridge about their discoveries). The image above shows Michael Berridge, Bob Michell, Robin Irvine and Yasutomi Nishizuka (L-R) together at a CIBA Symposium on Phosphoinositols and Cell Signalling in 1987.

Some of Robin’s past Babraham colleagues asked him to reflect over some of the highlights of his career (and sneaked in some slightly more personal questions).

On Robin’s research and career:
Q. Why did you come to work at Babraham and why did you work on phosphoinositides?
A. Not why, but who. The answer is Rex Dawson, my father in science, the co-discoverer of (amongst many other things) PIP2, PI-PLC (Phosphoinositide phospholipase C) and the rapid specific labelling of phosphoinositides that first revealed their special physiological role.

Q. When were you happiest in the lab?
A. Most of all, there was a period from 1982-85 when as well as contributing to the elucidation of (145)IP3’s physiological function, we also worked out the isomeric configurations of two new inositol phosphates, (134)IP3 and (1345)IP4. ‘We’ was essentially my two technicians, Andy Letcher and Dave Lander, and me. Not only were we not constrained by any ‘politics’ or ‘relevance’ issues (see below for more on this), but we were sailing in completely unchartered waters and this was a heady mix.

I should add that there was a second halcyon period (though I wasn’t actually working in the lab myself) when I had Nal Divecha, Pete Cullen and Kath Hinchliffe all in my lab at the same time whipping up a storm on nuclear inositides, IP4 receptors and PIP kinases respectively, with Len Stephens and Phill Hawkins immediately next door revolutionising the PI3-kinase field. The buzz was unbelievable. 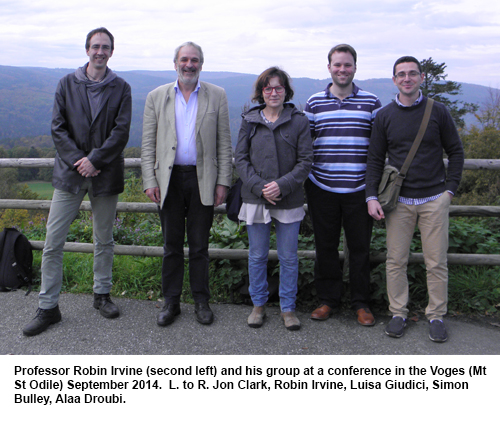 Finally, these last three years, with just four brilliant people (Jon Clarke, Luisa Giudici, Simon Bulley and Alaa Droubi - see image to the right), me being back in the lab (scary – for the others), and not worrying about the long-term future of the funding (because I’m retiring!), have been especially enjoyable.

Q. What’s your greatest regret?
A. I don’t have any regrets really; life’s too short. If I could look back and see one scientific decision that I would have changed, I would say it was in early 1985 when I met Ray Erikson at a meeting in Baltimore and after my talk he asked me to collaborate looking at inositol phosphate isomers in src-transformed fibroblasts by HPLC. We did this, and there was no obvious difference from controls. If I had had the nous to get Ray to send me the lipid pellets and analysed them in the same way (which we could have done easily), we would have found PI3P several years ahead of the game!

Q. What are proudest of in your career?
A. Scientifically, the (134)IP3 and (1345)IP4 work that I mention above. More broadly, the success of my scientific ‘children’ – former members of my lab.

Q. You were brilliant at encouraging the careers of people in your lab was this just so they’d make you famous?
A. I never thought as to ‘why’ I did – it just seemed right and immensely enjoyable to do so. And of course it did help to make me famous because of all the great publications we produced together!

Q. At the time of the key discovery of IP3 as the molecular messenger that releases intracellular calcium, did you really have any idea of what you were doing at the time?
A. I can remember an occasion when Mike [Berridge] said to me ‘It’s a good thing we don’t have to write a grant to do this stuff!’ At times we truly were blundering along hoping it would be OK, and as far as the (134)IP3 work was concerned I was actually told by a couple of chemists that I was simply wasting my time. But we were in a very fortunate funding position and it is scary to think how we would have coped in the current funding environment – actually, the truth is we would not have coped at all.

Robin spills a few beans on himself and future plans:
Q. We noticed the lute in the background to the video. We thought successful scientists were supposed to work all the time, so, are you just cleverer than everyone else?
A. No. The real answer to this connects with the previous question. During the period 1982-85 I was not only extraordinarily lucky to be in the right place at the right time scientifically, but also equally lucky as to my funding/job situation. I had a permanent job, no grants, no teaching and no admin (and Impact Factors were something you only read about in engineering journals), so when I got into work every morning all I had to think about all day was IP3(s – both of them). So with my two full-time technicians I could get an amazing amount done and still get home in time to bathe my two young children. How many of today’s academic scientists in their early 30s are in that kind of position? None that I know of.

This wonderful start to my independent career fed into the rest of my time in science, as from then on my success attracted a stellar cast of talented scientists (e.g. see above) who produced wonderful stuff without me having to spend all hours in the lab.

I think I also helped myself in this regard by being reasonably good at saying ‘no’. Recently I have been making a start on the Herculean task (look up Augean Stables) of clearing out my office, and it is amazing just how many past invitations to conferences, committees, editorial boards etc. I have found, all of which I have annotated ‘No!’.

Finally, my own personal experience is that I simply cannot function effectively if I work too hard. I need ‘time out’ for my brain to recharge, and playing music is a major recharging relaxation; so much so that sometimes I think I would have been perfectly justified in getting one of my grants to pay for my lutes!

Q. Where’s your favourite place?
A. Difficult, because I have been to so many wonderful places in my life. Probably still the New Forest, where I grew up, which must be the most beautiful and biologically fascinating 100-odd square miles of countryside that I know of. Nearer to Cambridge, the wonderfully desolate North Norfolk coast between Hunstanton and Wells comes a close second, and my wife, Sandi and I have recently bought a small cottage in Holme-next-the-Sea, which is definitely going to feature in our post-retirement activities.

Q. Do word-play jokes run in your family (genetic) or was your habit a result of a bang to the head (environment)?
A. Er…..[engage default blame programme]…. I blame Mrs Thatcher.

Q. What’s the most embarrassing thing that’s ever happened to you?
A. Not sure, but high on the list was the time when I co-organised a conference in Paris, and after a fairly boozy conference dinner I went to bed, leaving attached to the outside of my hotel room a request for breakfast (items ticked on the menu) to be brought to my room at 8am. A certain post-doc whose name rhymes with Dawkins knew which room I was in, and later that night he ticked almost everything on the selection menu and changed the time to 5.30am. So at 5.30 I emerged from a deep sleep to answer a knock on the door to find a waiter with two trolleys groaning with enough food for an army. I told him to go away (or to quote Alan Bennett, that was the gist of what I said).

Q. So, now you’ve retired, is there anyone or anything you’d like to have a real go at?
A. Not really. I’ve always spoken my mind, so retirement doesn’t liberate me in that respect. Having said that, perhaps I should reiterate my despair at the way academic science is going and my fear that we will soon lose what is one of our most precious assets – our universities (and academic research institutes). These have been and should be the UK’s (and the world’s) principle repositories, creators, and conveyors of knowledge to the next generation. No more, no less.

Part of the problem (in addition to funding squeezes) is the ever-increasing ‘top down’ management of academic science, as personally I am passionate in my opposition to this. From my 43 years in the business I am convinced that the only people who know what is going on are those actually doing it, so we should leave it up to them to decide which avenues to pursue.