Brain in a dish to learn more about Alzheimer’s disease

Brain in a dish to learn more about Alzheimer’s disease

Researchers at the Institute have found a way to replicate one of the earliest changes in Alzheimer's disease in a dish. This means that it should now be possible to find out a lot more about why it happens – and how to stop it. The new findings are published in the journal Molecular Neurodegeneration and supported by the charity Alzheimer’s Research UK.

Currently, there are no effective treatments to slow or stop Alzheimer’s disease, only ones that aim to manage the disease’s symptoms. This is due in part to difficulty in identifying the first physical signs of the disease in its early stages. Early treatment is an important goal as it could prevent the irretrievable loss of nerve cells seen as the disease progresses.

Being able to properly understand what is happening in the brain as a result of Alzheimer’s disease requires an accurate and accessible system. Until now, much research has relied on post-mortem brain samples, either from people who have passed away with the disease or from mice bred to show features of Alzheimer’s. 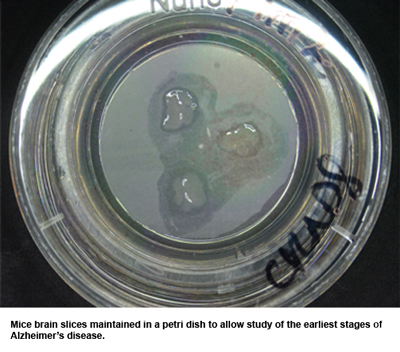 Researchers at the Institute have used a method to sustain brain slices from mice in the laboratory. The advantage of these brain slices is that they retain a 3D structure, containing the many different types of cell found in the living brain. The brain slices can survive for several weeks, allowing longer-term studies into what happens to a brain affected by Alzheimer’s, and they can be imaged in real time, sampled and manipulated by the addition of drugs.

The team used the technique to study one of the earliest and most clinically relevant changes in human Alzheimer’s disease which is the loss of synapses – the connection points between nerve cells that allow them to communicate with each other. The brain slices the team studied were taken from young mice bred to develop features of Alzheimer’s disease and contained the hippocampus, a key part of the brain that is important for memory and is affected by the disease. The researchers were able to observe a build-up of the hallmark Alzheimer’s protein amyloid in the slices over time, gaining important insights into how this increase is associated with a loss of proteins in the synapses responsible for transmitting signals between nerve cells. They were also able to treat the slices with a drug to effectively modify the amount of amyloid protein they produced, highlighting the future value of this approach for testing potential new Alzheimer’s treatments.

Claire Harwell, a PhD student at the Babraham Institute and first author on the paper, said: “This technique will help us to observe the earliest, usually hidden, stages of Alzheimer’s disease whilst providing an accessible system for the identification of promising treatments. For effective therapeutics to be developed, we must understand and target the disease at its earliest stages.”

The method reduces the numbers of animals required to undertake this type of research and means that researchers can study important stages in the disease process without the mice themselves experiencing disease symptoms. It also allows researchers to study live brain tissue and learn how it reacts to drugs in a way that isn’t possible with living humans or mice.

Professor Michael Coleman, research group leader at the Babraham Institute and Professor of Neuroscience at the John van Geest Centre for Brain Repair, explained: “The value of the system is that candidate drugs can be readily delivered and the effects monitored, thus filling a vital gap between cell culture and animal studies. We expect that this approach will be extremely useful in research into Alzheimer’s disease and potential treatments.”

Dr Simon Ridley, Director of Research at Alzheimer’s Research UK, said: “To develop new treatments for people with Alzheimer’s we need a better understanding of the disease and how it affects the brain. The brain is a very inaccessible organ, presenting researchers with a unique challenge, particularly when studying the very early stages of diseases like Alzheimer’s. It’s important for scientists to use a range of approaches to understand different aspects of Alzheimer’s and this new research provides a window into some of the early stages of the disease process. Research such as this has the power to open new doors to studies in humans and to help in the search for new treatments for this devastating disease.”

This work was published in the journal Molecular Neurodegeneration and supported by Alzheimer’s Research UK. The Babraham Institute is strategically funded by the Biotechnology and Biological Sciences Research Council.

As a publicly funded research institute, the Babraham Institute is committed to engagement and transparency in all aspects of its research. The research presented here used brains from mice in order to study the changes associated with the onset of Alzheimer’s disease.

All animal work was approved by the Babraham Institute Animal Welfare and Ethical Review Body and UK Home Office, and carried out in accordance with the Animals (Scientific Procedures) Act, 1986, under a Project Licence. In evaluating any research using animals, the Institute applies the principles of reduction, refinement and replacement. One of the benefits of this study is to provide new methods for this.

Please follow the link for further details of our animal research and our animal welfare practices.