A team of Cambridge researchers led by scientists at the Babraham Institute have discovered the hidden connections in our genomes that contribute to common diseases. Using a pioneering technique developed at the Babraham Institute, the results are beginning to make biological sense of the mountains of genetic data linking very small changes in our DNA sequence to our risk of disease. Discovering these missing links will inform the design of new drugs and future treatments for a range of diseases, including rheumatoid arthritis and other types of autoimmune disease.

Comparing the genome sequences of hundreds of thousands of patients and healthy volunteers has revealed single-letter changes found more frequently in the DNA sequences of individuals with specific diseases. In most cases, the disease-linked changes occur in the large swaths of DNA located between genes, often referred to as junk DNA. The fact that the changes are not in or near genes has made it challenging to understand how they could cause disease.  Now, as reported in the leading journal Cell, the Promoter Capture Hi-C technique is being used to fill in the missing pieces by charting interactions between genes and sequences far away on the DNA thread. 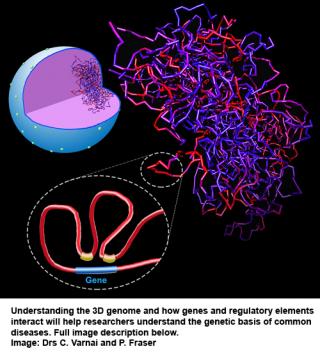 The Promoter Capture Hi-C technique works by identifying parts of the genome that physically contact and regulate genes. The long thread of DNA is highly folded inside cells, allowing regions very far apart on the thread to contact each other directly. Dr Peter Fraser, Head of the BBSRC-funded Nuclear Dynamics research programme at the Babraham Institute which coordinated the study and a senior author on the paper, explained: “By identifying which parts of the genome connect with which genes we have discovered hundreds of thousands of regions that are necessary to switch genes on and off. Small changes to the DNA sequence of these distal regulatory regions can interfere with the normal control of genes, leading to a greater chance of developing a specific disease. The power of this approach is that it allows us to make biological sense of very tiny changes in the genome that have big impacts on health.”

By mapping the regions of the genome that interact with genes in 17 different blood cell types the researchers were able to create an “atlas” of contacts between genes and the remote regions that regulate them in each cell type. They then matched this information to known changes in DNA at these regions that are linked to specific diseases. This allowed them to uncover which genes are affected by these DNA changes, pointing to their roles in disease.

The different blood cell types were obtained from blood samples donated by healthy volunteers of the NIHR Cambridge BioResource or by culture of blood stem cells in the laboratory of Dr Mattia Frontini, leader of the blood cell epigenome team at the University of Cambridge’s Department of Haematology.

Professor John Todd, Director of the JDRF/Wellcome Trust Diabetes and Inflammation Laboratory and founder and former principal investigator of the Cambridge BioResource said: “These results are a giant leap in understanding the inherited and cellular origins of common diseases and in how the human genome works.”

The team found thousands of new genes linked to specific diseases, including autoimmune diseases such as rheumatoid arthritis, type 1 diabetes and Crohn’s disease that are currently incurable and notoriously difficult to treat or prevent. This knowledge could enable new drugs to be designed targeting those genes, or repurposing of already existing drugs to treat these conditions.

Dr Mikhail Spivakov, group leader in the Nuclear Dynamics research programme at the Babraham Institute and a senior author on the paper, said: “Mapping the genome’s regulatory interactions establishes the missing link between a genetic change at one part of the genome with the gene it ultimately affects. While the results currently look promising, it will take many more years of work and rigorous testing before new treatments become available as a result of this fundamental research”.

As a large multi-partner study, this research was collaboratively undertaken by the Babraham Institute, the JDRF/Wellcome Trust Diabetes and Inflammation Laboratory in the Cambridge Institute for Medical Research and the Departments of Medicine and Haematology at the University of Cambridge, the EMBL-European Bioinformatics Institute, the NHS Blood and Transplant organisation and the MRC Biostatistics Unit. The research was funded by a grant from the Medical Research Council whereas the researchers and organisations involved are supported by several funders including the UK’s Biotechnology and Biological Sciences Research Council, the British Heart Foundation, the Juvenile Diabetes Research Foundation (JDRF) and the Wellcome Trust in addition to funding from the European Commission (multiple sources).

Header image: An abstract illustration of DNA. The Promoter Capture Hi-C technique ‘freeze-frames’ the genome and captures its three dimensional conformation where the DNA folds to bring regions into close contact. The technique pinpoints where non-coding regulatory regions contact the genes that they control, often over large genomic distances. Image credit: Shutterstock 290645906 by blackdogvfx.

Inset image: The image shows a cut-away cell nucleus (top left) with one chromosome highlighted and enlarged on the right. Each chromosome contains hundreds of genes. Enlarged section of the chromosome (bottom left) shows how chromosome folds to allow distal control regions of the DNA thread (yellow) to directly interact with a gene (blue). These distal control regions switch genes on and off. Small changes in the DNA sequence of the control regions may interfere with normal gene expression and lead to disease susceptibility. Image: Drs C. Varnai and P. Fraser