The splice of life

The splice of life

When our genes are used by cells, molecular machinery reads the base pairs and prepares a transcript called messenger RNA that can be translated into proteins. Most of the genes in our body can generate multiple distinctive messenger RNAs through a process called alternative splicing. In fact, recent studies predict that more than 95% of human genes are alternatively spliced. The research conducted here in the Turner lab is focused on deciphering the role of this complex mechanism mediated by RNA binding proteins on the differentiation of lymphocytes. We use a number of tools and techniques which are always improving, and have recently developed our own.

What are lymphocytes and why do they need alternative splicing?

Lymphocytes are immune cells that are vital for the adaptive immune response. There are multiple types of lymphocytes including B and T cells which remember past infections. During an infection, lymphocytes undergo changes in their gene expression and transcriptome, the mRNA produced in the cell, to fulfil their function in the immune response. To illustrate, B cells differentiate into plasma cells producing antibodies to neutralise the immediate threat, but they also form memory cells that persist and rapidly become plasma cells upon reinfection. For one cell population to be able to mount these types of responses, gene expression is dynamically regulated by a variety of mechanisms before and after the messenger RNA is generated.

Alternative splicing is one of the post-transcriptional events which regulates the diversity of the RNA and in turn protein isoforms. Protein isoforms are similar but not identical and so have different functions. Therefore, the ability to splice genes is crucial for a successful immune response.

How are different messenger RNAs produced?

The selection of alternative splice sites found in the messenger RNA precursors results in the formation of different messenger RNA isoforms.

Alternative splicing is mediated by diverse mechanisms. This can include inclusion or exclusion of introns and exons as well as alteration of transcription start and end sites. 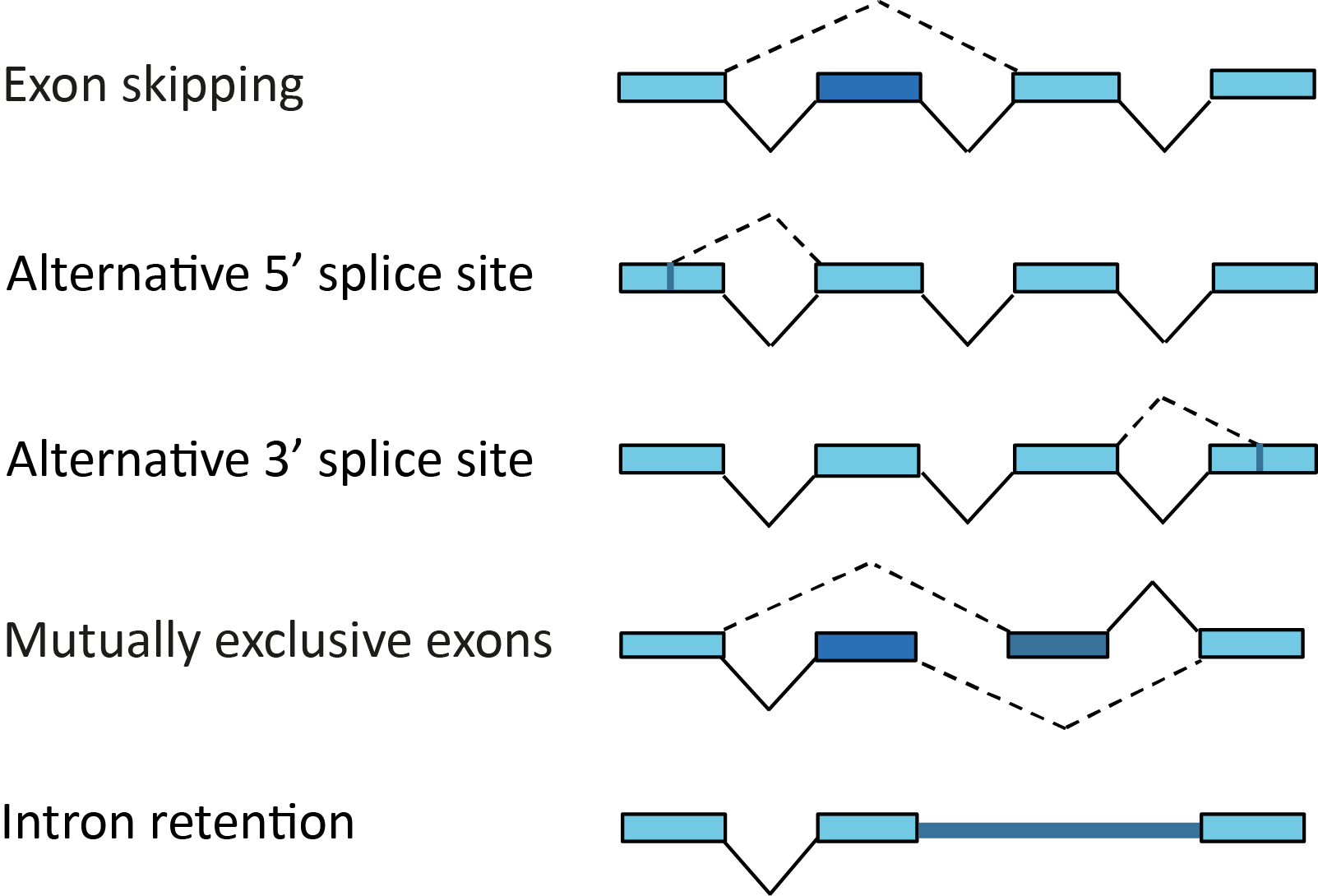 Many molecules are involved in the coordination of the alternative splicing. RNA binding proteins (RBPs) influence the decision and execution of the splicing depending on the particular RBPs present, and how many there are.

The differentiation of lymphocytes is a good example of this mechanism. Before an infection is detected, B cells express one isoform of a gene which might be important for the maintenance of naïve B cell. Upon an infection, the same cell expresses a new isoform which is essential for the differentiation of B cells into antibody producing plasma cells or memory cells. 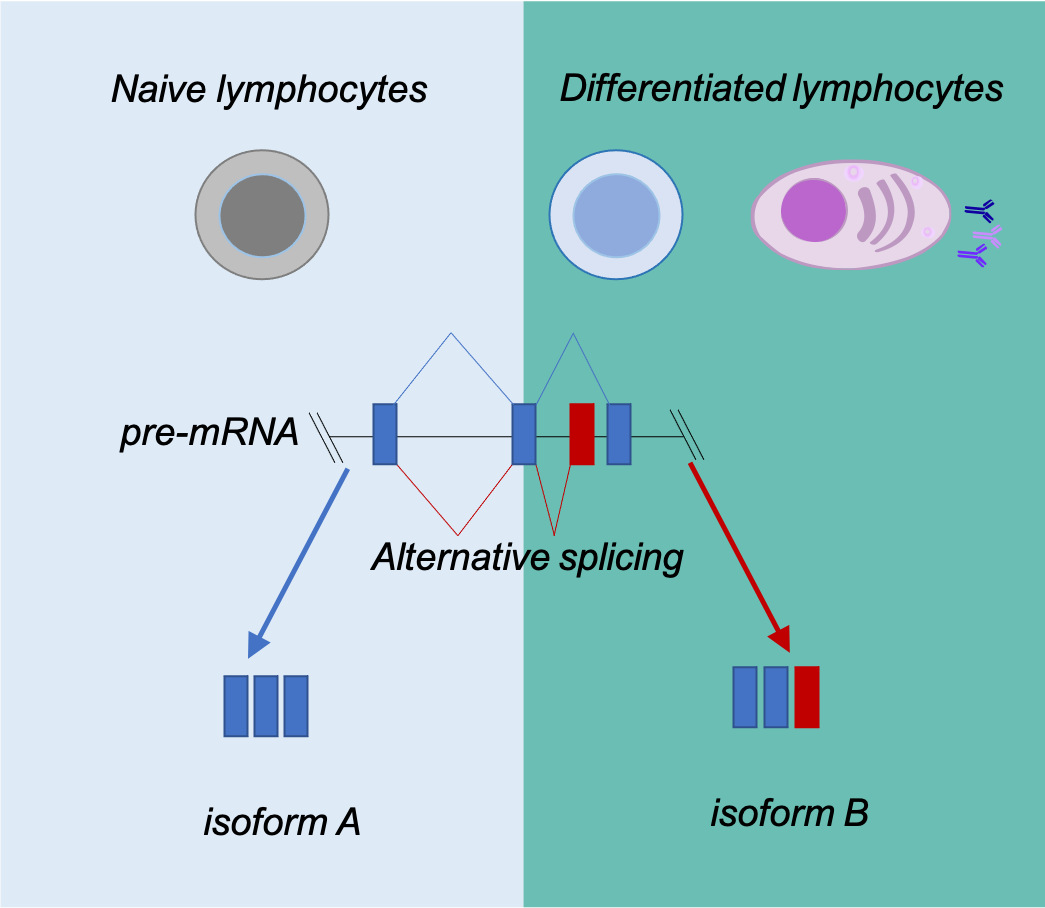 One example for this is the production of the antibody IgM, which comes in two forms, one secreted and one membrane spanning. The isoforms encoding secreted IgM increase and those encoding the membrane spanning isoforms of IgM decrease upon the differentiation of B cells into antibody producing plasma cells [1]. The secreted IgM then neutralises the antigens of the immune threat.

How are the alternatively spliced isoforms measured by researchers?

As researchers, we are keen to understand more about the different spliced transcripts. So called ‘high-throughput’ methods such as RNA-sequencing are used for the detection of alternative transcript isoforms. In the majority of studies, the identification of alternative isoforms relies on short-read sequencing, which requires computational tools for transcriptome assembly from small fragments of RNA.

These methods are time consuming and don’t provide accurate transcript reconstruction. Sometimes the short-read method leaves gaps, and it can be difficult to get a good idea of the transcription start and end sites or when genes have many exons with complex splicing patterns. This limits our understanding of lymphocyte genome splicing.

Fragmented short reads are challenging to assemble and generate reference genomes. Hence, the shortcomings of this technique make it impossible to detect the complex transcript variants reliably Therefore, the need for longer reads led to the generation of new sequencing platforms.

The next generation sequencing method using nanopores allows full-length transcript sequencing, which overcomes the limitations of short-read sequencing. A pioneer in this field is Oxford Nanopore Technology, which produces portable and small sequencing devices. Nanopores are embedded in a membrane for direct sequencing of single stranded DNA or RNA. As single strand of DNA slides through the pore, a reader in the pore detects single nucleotides by alterations in ionic current signals.

Long read sequencing using the standard method requires plenty of starting RNA material, something that can be difficult to collect a lot of if the cells under investigation only exist in small numbers. When the amount of starting RNA is small, there are enough read outs to draw conclusions.

To overcome this barrier, we adapted this ‘long read’ technology to identify the different transcript isoforms that only needed a small input. Though several rounds of optimisation, trying different methods allowed us to decrease the input material and to increase the number of reads generated by nanopore sequencing.

With our method, we improved the coverage of the gene by 10 times, allowing us to analyse differential gene expression and isoform expression more accurately than before.

"Nexons” the future of isoform detection from nanopore data

One of the challenges of nanopore sequencing is the bioinformatics analysis of the data which is not easy. We investigated three different bioinformatic tools for the detection of transcript isoform from long-reads. The splice variants detected by those tools were not consistent with our findings from nanopore raw data and previous findings with other data sets generated in our lab with short-read sequencing. All of the bioinformatic tools lacked the ability to detect the splicing variants of complex isoforms accurately.

Our team, Ozge Gizlenci (me), Simon Andrews, Laura Biggins and Louise Matheson, decided to improve the splice variant detection by developing a new bioinformatic tool. We named this tool “Nexons” a new method of analysis for the detection of transcript isoforms from nanopore data. Nexons can identify alternative isoforms in an accurate and complete way.

Having developed a better method for isoform detection, we wanted to see how it would work with real human data. In collaboration with Daniel Hodson and Jingyu Chen at Cambridge Stem Cell Institute, we used our Nexons method to characterise the B cells in the human germinal centre, where B cell differentiation happens. Our results showed the alternative isoform use in different compartments of human germinal centre. 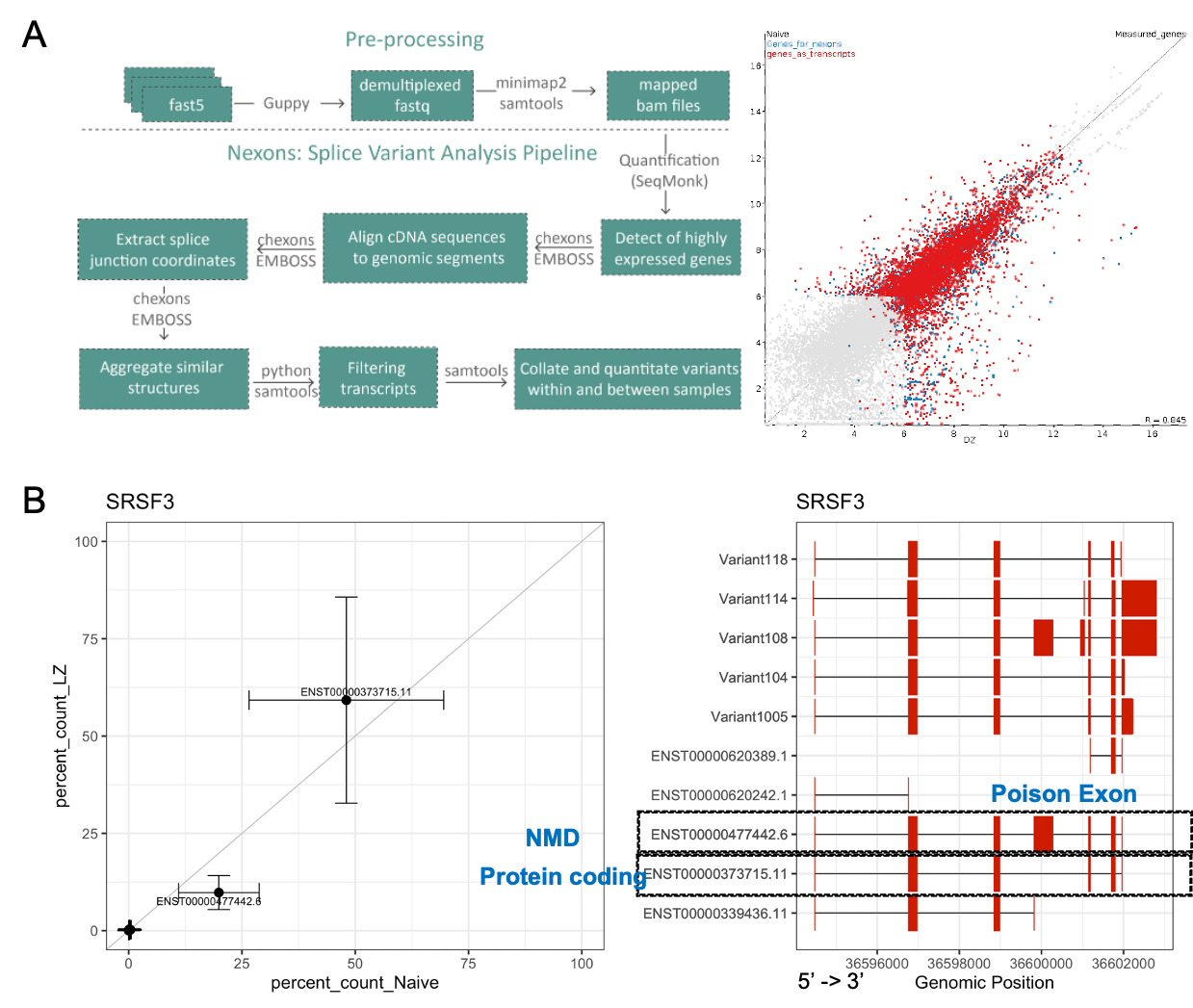 We are excited to see what we can discover using Nexons. Working with our colleagues and after establishing of the local and international collaborations, we aim to contribute to the understanding of RNA biology in the germinal centre reactions and to find answers to the question arising from abnormal functions of the immune system and related diseases.