Oxygen makes up 21% of the Earth’s atmosphere and plays a pivotal role in biological systems. Despite this, huge gaps remain in our understanding of how this essential element regulates cell signalling pathways and affects our immune system – questions that Dr Sarah Ross aims to answer.

We all need oxygen. We breathe it in some 17,000 times a day. And although we might sometimes feel its lack – sprinting for a bus or travelling to altitude – oxygen levels in our tissues vary widely in health as well during disease.

Ross is studying killer T cells – a critical component of the adaptive immune system – whose job is to hunt down pathogens and protect against cancer by producing cytotoxic compounds. To do their job effectively, they must travel widely and work well in the myriad oxygen climates they encounter.

“Our tissues have different oxygen concentrations and this has implications for immune cells,” says Ross. “T cells usually reside in lymph nodes and the spleen, but when they are called on to fight infection or disease they often find themselves in foreign oxygen environments.”

Many factors influence oxygen levels in our tissues: some are normal variations that reflect the oxygen needs of particular tissues, while others result from disease or ageing. Bacterial infections can drive up oxygen demand when bacteria and immune cells compete for oxygen. Areas around tumours can also become hypoxic due to uncontrolled cell division in cancer. Ageing, too, affects the picture because diseases that affect the lungs or blood vessels reduce the supply of oxygen. 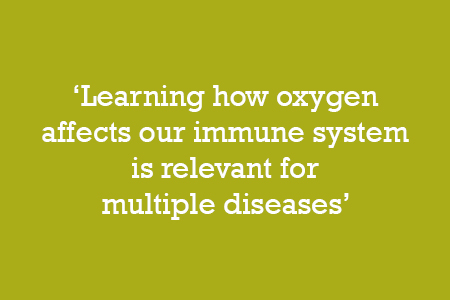 Teasing out how these low oxygen environments hamper T cells’ work is central to Ross’s research. Her work focuses on three key areas: the role oxygen plays during an immune response, how oxygen is linked to age-related declines in the immune system and whether or not we can help T cells work better by targeting these oxygen-regulated pathways.

Answering such big physiological questions at a molecular level demands painstaking precision. Ross works in vitro with T cell cultures grown in standard conditions and, while her methods sound simple, they pose huge technical challenges. “Putting cells in different oxygen environments is easy. What’s really difficult is controlling the amount of oxygen that each of those cells will sense,” she explains.

This is because of the many variables involved. Different culture media will affect oxygen availability, as will biological variation among the cells. And variations in the density of cells in each culture also impact oxygen demand. “Some cultures use more oxygen than others, so we have to be very precise to avoid accidentally creating hypoxia,” says Ross.

It’s an observation that she believes has important implications for in vitro research well beyond her field. “Even if you’re not studying oxygen, changes in cell density could be triggering hypoxia in cell cultures and causing variation in your data. It’s across the board – in cancer cells, stem cells and immune cells – and while it’s rarely talked about it’s fundamental.”

Her first couple of years at the Institute have been busy ones: Ross’s group has been studying how duration of hypoxia affects T cells, how hypoxia alters the abundance of certain proteins and identifying which molecules are mediating these effects. Ongoing research is expanding this work to develop an understanding how the oxygen levels that a T cell experiences during an immune response defines their fate and function. The capability to do this research has been boosted by the acquisition of equipment to develop a hypoxia and physiological oxygen facility at Babraham, which was funded by the BBSRC. Since joining the Institute in 2018 she’s also been identifying common themes with her colleagues across the Institute. “What we are discovering in immune cells has importance for other cell types too, and we are always finding new connections with the work going on in Signalling and Epigenetics.”

Understanding which proteins are being regulated in T cells and how these might be controlling T cell function has important implications, because by working out which molecules are involved, researchers will be able to identify new therapeutic targets against a range of diseases as well as using existing drugs in different ways.

“Hypoxia is relevant for multiple diseases. An obvious one is cancer, because we know it’s linked to hypoxia. But it might also play a role in how T cells function in inflammatory diseases like arthritis and Inflammatory Bowel Disease, which is something we need to investigate more,” Ross concludes.