Do you know the sex of the cells in your experiment? Despite increasing awareness of the importance of considering sex and gender in research, the rate of reporting is still staggeringly low. In 2013, only ¼ of papers published in the American Journal of Physiology-Cell Physiology reported the sex of the cells used, and 80% of those were male (fig 1, Shah et al.)

This isn’t entirely the fault of the researchers. Park et al found that suppliers often don’t even include that information, especially for non-human cells. Shockingly, fewer than 5% of mouse and only 85% of human cell lines from commercial vendors specified the sex (fig 2.)

Not including female cells or animals in research does have major repercussions. In the UK, adverse drug reactions to new drugs are 60% more common in women than in men (Martin et al.) Reporting the sex of cells, tissue or animals and analysing that data is just one example of how scientists can and are making research outcomes more inclusive. Here are a few others:

Despite current low rates, especially in biomedical sciences, there is evidence that sex and gender reporting is increasing (Sugimoto et al.) Funders and publishers are helping this trend along by requiring this information. However, beyond just reporting, the next important step is analysis. This requires consideration at every stage of the research process and methods for this are still not taught routinely. Luckily there are resources, such as the excellent Gendered Innovations. 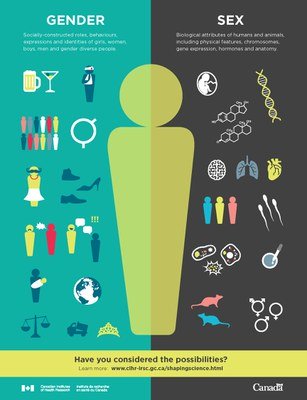 This isn’t just an issue of gender: race is important too. With the increased use of AI in research, having representative data sets is becoming more crucial. A 2017 report revealed that 88% of participants in genome-wide association studies were of European descent (Mills et al.) with 72% from just the US, UK and Iceland. This is something researchers and funders are working to improve, for example the H3Africa project and the NIH’s mandate to include women and minority groups.

The number of articles, meetings, and organisations that are allowing scientists to share ideas about why and how to create inclusive research has been booming. A major change like this can’t be tackled in isolation so it’s necessary to spread ideas and resources.

Papers with female first and/or last authors are more likely to report sex and gender (Sugimoto et al.) It’s a harder thing to determine but I wouldn’t be surprised if BME researchers are more likely to report ethnicity. It can be hard to be aware of your own blind spots so having researchers from a variety of backgrounds means fewer blind spots all around, better decisions and more inclusive research outcomes.

These actions are just the start of a long process to correct the biases and assumptions built into our current research practices. With continued awareness and work, we can achieve more and more equality in research outcomes. What are you doing to realise inclusive research?

Reducing our ecological footprint – a personal perspective Hanan's story: Research Access Programme 2022 A lab that sparks joy: my experience setting up a lab from scratch Top tips for new PhD students Why postdocs are “the Swiss army knife of biomedical research”

Reducing our ecological footprint – a personal perspective Hanan's story: Research Access Programme 2022 A lab that sparks joy: my experience setting up a lab from scratch Top tips for new PhD students Why postdocs are “the Swiss army knife of biomedical research”