The Sounds of the Genome

The Sounds of the Genome

The Institute does world-leading research, and using public engagement to enthuse, excite and inspire is a key part of our mission. This year, we teamed up with two innovative artists to transform our data into a virtual reality experience. The result, CHROMOS, is allowing new audiences to discover the DNA drama that goes on inside the nucleus of a single cell. 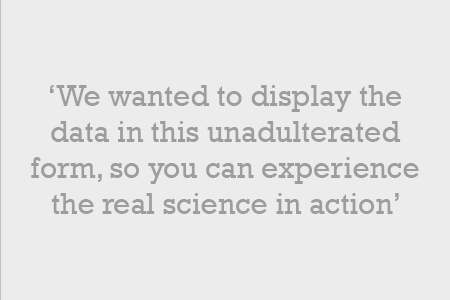 From Twitter to CGI, new technology is re-shaping how we work, play and communicate. But when Dr Mikhail Spivakov from the Institute’s Nuclear Dynamics research programme sent a tweet to music producer Max Cooper, neither thought that a 140-character message would evolve into a ground-breaking public engagement project.

Max – whose work spans dance-floor techno to fine art sound design – has more in common with Mikhail than meets the eye. With a PhD in computational biology but no formal music training, Max is fascinated by the rhythms of the natural world and the capacity of art and music for scientific storytelling.

“Mikhail tweeted Max inviting him to visit the Institute,” recalls Public Engagement Manager Tacita Croucher. “He’d seen some work that Max was doing, thought it was really cool, and wondered whether they could collaborate.”

After meeting Mikhail and his team, Max decided that they should work together on a project inspired Dr Csilla Varnai’s research, whose computer modelling has revealed the 3D organisation of DNA in single nuclei for the first time.

Our DNA is often represented as pairs of discrete X-shaped chromosomes, but the reality is altogether messier and more dynamic. With more than two metres of DNA packed into each cell’s nucleus, our chromosomes usually resemble a tangled ball of wool rather than neatly twisted skeins of yarn.

This tangle of DNA is constantly moving, folding and refolding into different arrangements. When sections of DNA move from the centre to the periphery of the cell, meeting and parting company from others, they are effectively switched on and off in a way that enables the complex machinery of the cell to function correctly.

Because they can now study the relationship between DNA structure and function in single cells, researchers will be able to ask questions that would have been impossible to answer before – questions that should help them understand how the activity of the genes encoded in DNA affect health, disease and ageing.

While for scientists the findings have important implications for human health, for Max they provide artistic inspiration. “This process of simulated folding to create our best guess of real chromosome structure is a beautiful process, so this beauty became the focus of the project,” he explains. And to bring out its full beauty, he decided to get CGI A-lister Andy Lomas – whose film credits include Hollywood hits from Avatar to the Matrix movies – on board.

Andy developed a way of transforming gigabytes of the Institute’s raw data into video sequences and a virtual reality experience while Max produced a musical score. “We wanted to express the data in this unadulterated form, so you can experience the real science in action,” Max explains. “It’s a glimpse into the complexity and form of one of the most important molecular structures in all of life.” 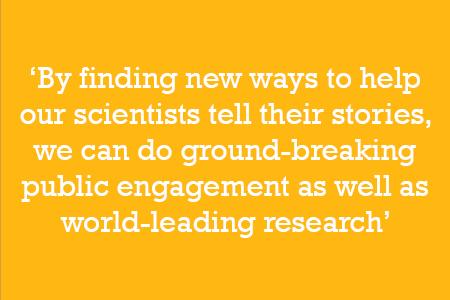 The result is CHROMOS: shimmering strands of DNA dancing to complex, layered melodies played on a sansula, a magical thumb piano made from small metal tines. The video has been viewed thousands of times on YouTube and the VR experience enjoyed by audiences at London’s Science Museum, the Cambridge Science Festival and the Open Codes exhibition at ZKM Karlsruhe as well as in Berlin and Lisbon.

People’s responses, says Tacita, have been amazing: “Our aim was to spark conversation, make people think differently and engage audiences who would perhaps not usually engage in science research. And we’ve achieved that. It’s been a major success.”

The project has also attracted attention from the public engagement community. “CHROMOS was a significant investment for the Institute and very different from anything we’ve done before,” she says. “Its success shows that by finding new ways to help our scientists tell their stories, the Institute can do ground-breaking public engagement as well as world-leading research.”

And for Institute researchers like Mikhail, it’s been hugely rewarding. “As a biologist I’m passionate about finding ways to make our science more accessible, to help people understand what we do and why we do it,” he concludes. “It was amazing to see how the project took real data from the lab and turned it into a multidimensional experience which allows people to get more closely acquainted with our DNA, what it does and how it looks, making it almost palpable.”