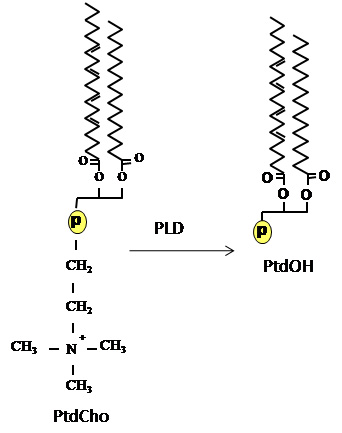 Phospholipase D (PLD) is an important enzyme which catalyses the hydrolysis of phosphatidylcholine to phosphatidic acid. Phosphatidic acid (PA) is a precursor to the synthesis of all cellular phospholipids and so understanding its regulation is crucial to revealing changes within the lipidome during ageing.

The regulation of mammalian PLD1 and PLD2 activity is complex which is not surprising given that the substrate (PA) makes up 40% of the cells total phospholipid. Regulation is dependent on stimulatory inputs from both phosphoinositides and cellular proteins such as protein kinase C isoforms and members of the Arf and Rho families of small GTPases.

In order to fully understand the physiological importance of PLD1 and PLD2 we are currently utilising mouse models that no longer express one or both PLD genes along with isoform selective inhibitors. This has led us to begin to understand the roles of these enzymes within neutrophils, important cells of the innate immune system which maintain the body’s defences against infection during ageing.

These tools have also allowed us to highlight that previous studies relying heavily on the use of primary alcohols as inhibitors of PA production may have confused the PLD field and that the PLD knockout mouse model should be used as the gold standard.

Our on going research uses these tools to investigate the roles of PLD1 and PLD2 in metabolism, brain function and other cells of the immune system during healthy ageing. There is currently contradictory published evidence on the role of PLD in autophagy.

Work in our lab is currently investigating a possible role for the additional putative PA producing enzymes PLD3, PLD4, PLD5 and PLD6 in autophagy. These new members of the PLD family share some sequence homology with classic PLD genes but are currently understudied and have not been shown to generate PA from PC.