T lymphocytes, or T cells, are a critical component of the immune system and are vital for fighting infection and preventing the growth of diseased or damaged cells. We are interested in understanding these immune cells at the molecular level, and combining biochemistry, mass spectrometry, cell biology and immunology to generate a deep understanding of the molecules and processes which control the function of these vital cells. Our aim is to understand both healthy and impaired immune responses and identify factors that can lead to autoimmunity, declined immune function with ageing and immunosuppression associated with the growth of tumours within the body.

A particular focus of the group is CD8+ T cells, which play a very important role in immune responses by destroying diseased cells (Fig. 1). Due to their highly destructive capacity, the activity of CD8+ T cells must be tightly controlled, so that they are only activated under the correct conditions, and do not damage healthy cells. Conversely, they must maintain sufficient levels of activity so that they can kill diseased cells efficiently. Therefore, the activity of effector T cells must be correctly balanced.

Figure 1: CD8+ Effector T lymphocyte differentiation. Naïve CD8+ cells patrol the body and are maintained in a quiescent state until they are alerted to signs of infection. Peptide antigens derived from diseased cells are found on the surface of antigen presenting cells (APCs), where they can be detected by the T cell receptor (TCR) on the surface of the T cell. Activation of the TCR by the APCs triggers signalling pathways within the T cells that culminate in activation of gene expression programs that induce the differentiation of the naïve T cell into cytotoxic effector cells (CTLs) so that they acquire the ability to destroy diseased cells by synthesising and releasing cytolytic effector molecules and cytokines. The differentiation programs are further shaped by cytokines that are produced during the immune response. Activated effector T cells move to the site of the diseased cells, where they then produce and release effector molecules that contribute to the eradication of the unhealthy cells.

The differentiation of naïve CD8+ T cells to effector CTLs is controlled by the activation of signalling pathways that initiate metabolic, transcriptional and translational programs that both reconfigure the protein composition of the cells and dramatically increase their biosynthetic capability and ability to increase their size and mass.

Proteomic and phosphoproteomic analyses of effector T cells are powerful tools to quantify the control of proteins and phosphorylation networks in CTLs (Ross et al., 2016; Rollings et al., 2018). We have observed that the signalling pathways that control CTL function are a complex network that integrate many aspects of T cell biology (Ross et al., 2016). In addition, we have quantified that CTLs store many millions of the cytolytic granzyme molecules that they use to kill target cells (Rollings et al., 2018). Moreover, after encountering a diseased cell, CTLs activate signalling cascades and gene expression programs that allow the rapid synthesis of hundreds-of-thousands more molecules of effector cytokines.

The diseased tissue environment can play an important role in influencing the function of CTLs (Fig. 2). Many different ligands for checkpoint molecules and cytokines instruct CTLs, either stimulating their activities or preventing them from indiscriminately attacking other cells. In addition to such immune cues, physical factors of the immune niche also play a role in how efficiently CTLs can perform their function, for example, the vascularisation of the tissue determines how efficiently nutrients are delivered to the area. Furthermore, other metabolically active cells within the tissue, such as other immune cells or cancer cells, can deplete the environment of nutrients and generate metabolites both of which may impact on CTLs. 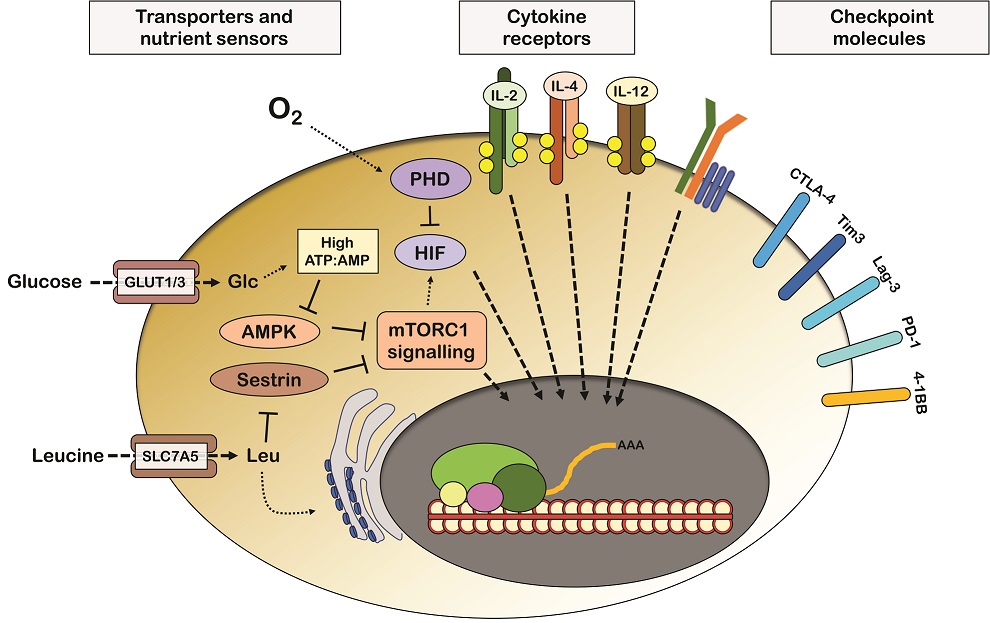 Figure 2: Environment sensing molecules expressed by CTL. On the surface of CTLs, there are a number of molecules that can activate signalling responses to immune cues, such as inflammatory cytokines and immune checkpoint molecules. These immune signals may either boost or inhibit the differentiation and function of CTLs. In order to sustain energy generation and biosynthesis, CTLs have thousands of transporters for glucose and amino acids and utilise oxygen for oxidative phosphorylation. Intracellular sensing molecules monitor the levels of these nutrients, and can modulate the function of the CTLs depending on the nutrient supply. These pathways can signal to the nucleus of the cell, or regulate the activation of other signalling pathways to allow CTLs to make appropriate transcriptional responses depending on their environment.

A main focus of the group is to understand how tissue oxygen levels control CTL function. Approximately 21% of the atmosphere is oxygen, but the oxygen levels within different organs vary, and many tissues have less than 5% oxygen. When CTLs are competing for oxygen with multiple cells, such as at a site of infection or when they are infiltrating a tumour, the demand for oxygen is greater than the supply and they experience hypoxia.

We are interested in understanding how different facets of signalling and gene expression are regulated in T cells in response to different oxygen levels and how these integrate with the classical Hypoxia Inducible Factor 1 (HIF1) transcriptional response that promotes the adaptation of cells to low oxygen. Our goal is to generate an in-depth understanding of the molecular mechanisms by which oxygen levels shape functional and dysfunctional T cell responses.