The Institute is committed to being open and transparent about its research, engaging people of all ages and backgrounds, listening to and considering their hopes, concerns and aspirations. To do this, the Institute collaborates with partners to develop new opportunities. Here you can find out more about the major collaborative projects we are currently working on.

Science and technology are interwoven in our lives; they have and will continue to transform our world. However, with this huge potential comes ethical, legal and social dilemmas. ‘Responsible Research and Innovation (RRI)’ aims to explore this by broadening the engagement of society with research, to better align societal expectations with the process and outcomes of scientific research – involving society in discussions about how science and technology will shape our future.

Vaccines On Tour: Why Should We Care About Vaccination?

Open Science: What’s It All About?

Our new public engagement officer, Stephanie Norwood, talks about what she&rsquo;s learned in her first few weeks on the job and how you can get involved with the <a href="http://www.orion-openscience.eu/">ORION Open Science</a> project.

Reflections on a great year of Public Engagement

In 2017, the Institute along with a consortium of research institutes, research funders and public/patient engagement organisations were awarded €3.2m for a four-year EU-funded project ‘ORION’ - ‘Open Responsible research and Innovation to further Outstanding kNowledge’. The project focusses on embedding RRI principles (ethics, gender, governance, open access, public engagement and science education) across the organisations involved. We are exploring these ideas through three themes:
Throughout the project there will be opportunities for public groups to become involved in all aspects of the work. For information on how you might get involved and the most recent project updates, please see the ORION website or contact the ORION Project Officer at the Institute.

Chromos is a collaboration between researchers at the Institute, musician Max Cooper and visual artist Andy Lomas. Get a taste of Chromos with the video on the right or click here to find out more.

In 2014 the Babraham Institute ran a public dialogue project to discuss the importance of fundamental biological research and its impact on society. Workshops were designed to summarise key research projects and areas of new and developing science and enabled Institute researchers to discuss their research and provided them with the opportunity to listen to the public’s views. The discussions covered key issues such as UK research funding allocation, how animals are used in the Institute’s research programme, which stages of a research project would be of most interest to a lay audience and how the Institute engages with the public. 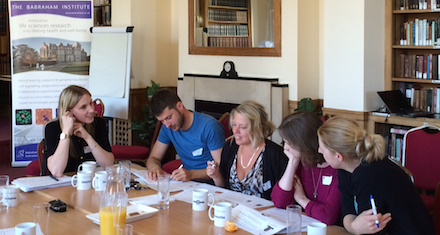 ​Further information about the project can be found in this news article and the report can be downloaded here.

The project was co-funded by the Biotechnology and Biological Sciences Research Council (BBSRC) and Sciencewise. The workshops were run with assistance from dialogue specialists Ipsos MORI