Please note that the information and figures on this page relate to 2016/2017 data. For information on the Institute’s gender pay gap report for 2017/2018 please see the latest report.

The table above shows the overall mean and median gender pay gap based on hourly rates of pay on 5 April 2017, the snapshot date for the 2016-2017 reporting period. It also captures the mean and median difference in bonuses paid to men and women in the year ending on 5 April 2017. According to data from the Office of National Statistics at the time of reporting, the average gender pay gap for organisations in the UK in 2016 was 18.1%.

During the 2016-2017 reporting period, the Babraham Institute used bonuses predominately, but not exclusively, for executive level employees, with a consolidated performance related pay system being more widely used for our core employees.

The above data identifies the Babraham Institute’s gender distribution across the four equal quartiles.

The Babraham Institute owns and runs an Ofsted Outstanding-rated day nursery which provides childcare facilities for its staff and the wider community. We report information on the pay of our nursery staff separately, as the facility operates in a different employment sector and is a self-sustaining entity.

The above table shows Babraham Nursery’s overall mean and median gender pay gap based on hourly rates of pay at the snapshot date (5 April 2017). It also captures the mean and median difference in bonuses paid to men and women in the year ending on 5 April 2017. Whilst Babraham Nursery had a higher than national average male workforce (3 male employees) in the 2016-2017 reporting period, the numbers were still very low compared to the number of females employed in the nursery. The small mean pay gap and greater median pay gap resulted from two of the male employees’ length of service and role grade. 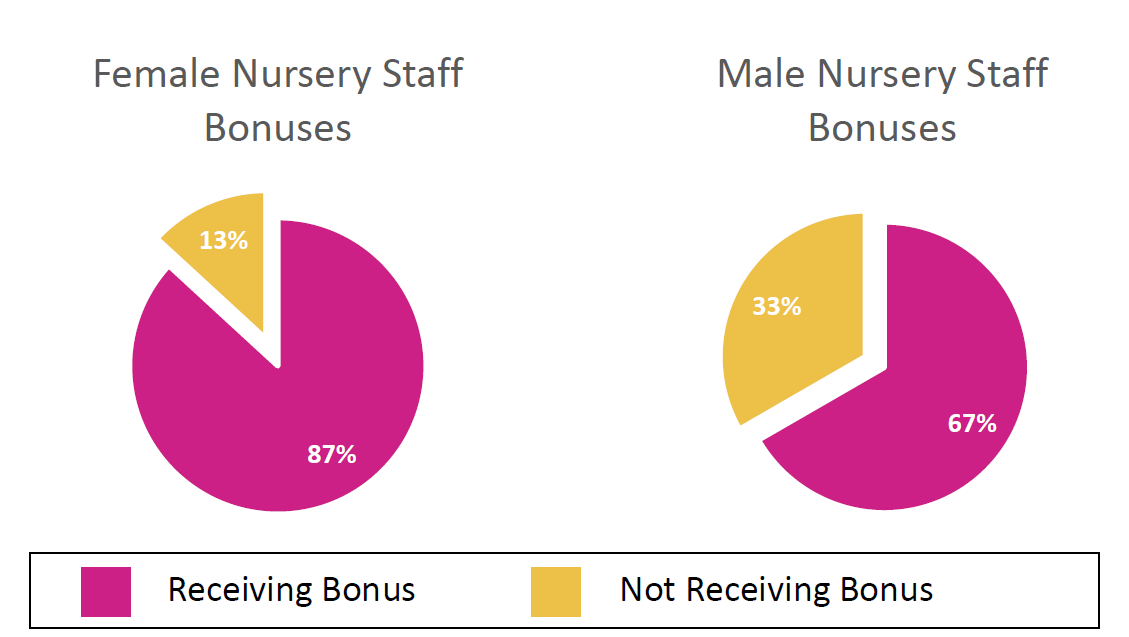 As described in the bonuses section for the Institute, bonuses are more commonly paid to executive level staff. However, in the year preceding the snapshot date of 5 April 2017, the Babraham Nursery was inspected by Ofsted and awarded a rating of ‘Outstanding’. Consequently, all nursery staff involved in and employed at the time of the inspection (April 2016) were awarded a one-off bonus in recognition of their exceptional efforts.